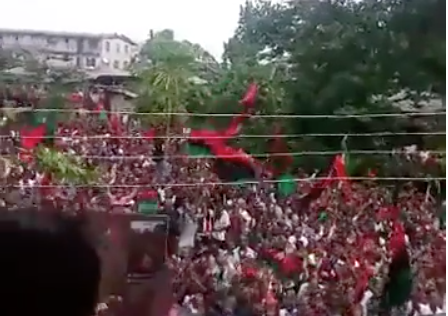 Thousands of pro-Biafrans are seen in this video converging at the home of Nnamdi Kanu for a speech.

In the clip they are heard singing, “all we are saying, give us Biafra.”

Kanu also prophesied death for anyone who says Biafra is dead

A huge crowd on Tuesday, June 20, flooded the palace of His Royal Majesty Eze I.O Kanu in Isiama Afara Ukwu, Umuahia. The crowd mainly members of the Indigenous People of Biafra (IPOB) were at the palace following a call made by its leader Nnamdi Kanu.

The member’s of the group in their hundreds sang various ‘Biafra songs’ and other songs of freedom – all in Igbo language.

Also addressing the crowd, Kanu said he was delighted that such number of people heeded to his call. He said: “Yesterday, I asked Darlington to send a message to say that I want to see IPOBs here today, not too many of you I said but look at what came out.”

In loud voice, Kanu asks the crowd, “Are we ready for freedom?” And the IPOB members replied with a resounding shout of, “Yes!”

Continuing, the IPOB leader said, “Because we are not going back.”

Until the zoo agrees on a date for referendum, there will be no election here anymore. We are starting with Anambra…That they may know that this land belongs to our ancestors,”

Kanu said. Kanu said the lands in the South-East and South-South does not belong to anybody. “This land must be set free, here we shall die, and here we shall be buried,”

Kanu said. PAY ATTENTION: Read the news on Nigeria’s #1 new app He also encouraged the group members not to entertain any form of fear but believe in the Most High that Biafra will surely come to pass.

“Anybody that says Biafra will not come, that person will not be alive!” And the crowd chants, “Iseee!!” meaning amen to his prayers. Read more: https://www.naij.com/1110981-anybody-biafra-die-nnamdi-kanu.html