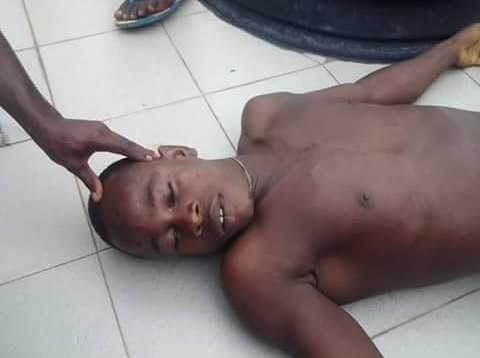 A soldier shot an Igbo man pictured above in Aba this afternoon according to updated reports. This happened at the famous Ariaria Market.

The fracas was triggered because a plain clothes soldier refused to pay for weed and went to bring other soldiers to arrest the seller for harassing him for his money. When they could not locate the trader, in anger the soldiers allegedly shot and killed the innocent Igbo man.

Mobs subsequently gathered in other areas and attacked Hausa settlements leading to mayhem and clashes with the army coming in and shooting sporadically.

At least three have so far been reported killed including at least one Igbo who sustained a gun shot wound allegedly by the army.

The Hausa victims were allegedly decapitated and burned.

The clash started when an Hausa cattle rearer allegedly stabbed an Igbo man after some slight quarrel. This led to anger among the Igbo people who saw what happened.

They killed two Hausa men at the spot, others scampered to the nearest police station, as the slaughter boys chased them with machetes and cutlasses.

The young Igbo man who was stabbed by the Hausa man, was reported to have died some moments later as he was stabbed from back to heart.

The news of his death made the slaughter boys to organize and head to Mosque street Aba,the Hausa community in Aba has been deserted over what they feared as bigger reprisals by Ogbor Hill slaughter boys.

There is chaos everywhere, from St. Michael’s Aba we didn’t know what happened, all we saw were group of people, some on foot and inside bus heading towards Mosque, with dangerous weapons, I have to run very far because even the security men could not stop them and there were gun shots everywhere.

My only problem is…… Why kill the other Hausa guy that had nothing to do with the stabbing. It is one person that was stabbed, why were two people killed?