Editor’s note: Amelia McDonell-Parry is the founding editor of TheFrisky.com. Before founding The Frisky, Parry wrote for a number of pop culture magazines, like Teen Vogue, Marie Claire U.K., and Rolling Stone.

Here is a short list of things I enjoy that over my 32 years on Earth, I’ve been told are, apparently, out to cause me physical harm: Red wine, the sun, high heels, cell phones, microwaves, plastic water bottles, yoga and diet soda.

So perhaps I’m just desensitized to bad news, because I cannot work up one ounce of concern over a new claim{abc2 News quote below} that skinny jeans are also bad for my health.

Wearing skinny jeans too tight can cause health problems

It’s a fashion trend that we’re seeing everywhere, at the mall, at work, and at school. We’re talking about skinny jeans.

They can be flattering, but if you’re not careful, they can also be harmful to your health.

Christine Barnabic is a fan of skinny jeans. She has a collection with various colors, various fabrics, but they all have a simliar look. She loves how skinny jeans can spice up her wardrobe.

Barnabic says, “You can wear the boots over them. It’s really nice in the winter and even during the daytime you can wear them with flats or jazz them up at night.”

But the one thing Barnabic doesn’t love is how difficult they can be to put on. She says, “They can be hard to get on because you’re trying to obviously pull them up.”

Doctors say you have to be careful and really weigh the price of looking good, to the price of good health. If they’re too tight, they can cause nerve damage.

Dr. Boyle says one woman described it as a floating sensation. She says that when she was walking. She felt weak and got pain in her thighs. The problem can be made even worse if your jeans are too tight, and you’re wearing high heels. 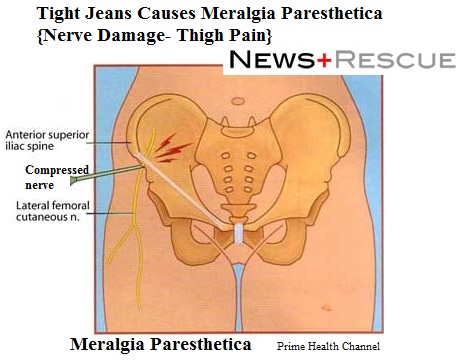 Dr. Boyle says, “When you wear high heels the axis of your pelvis changes and what happens is your pelvis tilts and your buttocks kind of kick out a little bit and your legs are longer looking. This is why women like to wear stilettos. But because the pelvis tilts some, it further accentuates the pressure that’s caused on those nerves. It can make the symptoms worse.”

To alleviate the pain, doctors suggest you wear jeggings or skinny jeans that have some stretch in them.

Barnabic says, “I feel like if you try something on, try it in different sizes up or down to see the best kind of fit and how the looks is. Then, also take into consideration the whole stretch idea to make it look comfortable and feel great.”

Dr. Boyle says if you feel tingling and numbness in your leg, stop wearing skinny jeans and the symptoms should go away. If you ignore the pain and continue to wear tight jeans, it could lead to more permanent nerve damage.

Karen Boyle, a microsurgeon who specializes in labiaplasty at the Greater Baltimore Medical Center, has apparently seen an influx of patients suffering from troubling symptoms of a disorder — a disorder! – that she says may be caused by their trendy skinny jeans.

She told HLN in an email interview that this disorder is called Meralgia Paresthetica, and while it doesn’t pose a significant health risk, it’s good to know the No. 1 culprit: Tight jeans.

“Skinny jeans can compress one of the nerves in the outer part of the thigh and cause symptoms of numbness, tingling and discomfort,” Boyle said.

And if you’re one of those women who wears skinny jeans with high heels — guilty! — then you’re adding possible further damage to your physique, because the high heels cause your pelvis to tilt, putting more pressure on those already stressed-out nerves, according to Boyle.

Now, I’ve been a skinny-jean diehard for the last couple of years and I have to say I have never experienced any of the symptoms Boyle describes. In fact, I am wearing a pair right now and there’s nary a tingle in my stems. Perhaps that’s because I don’t believe “skinny jeans” are synonymous for “way, way, way too tight jeans.”

If I must get technical, skinny jeans are defined by, duh, their skinny leg, but the part that is “skinny” in comparison to other styles of jeans are the calves. If you buy a pair of skinny jeans in your correct size, they really should not fit any tighter in the thigh area — the area of the body apparently under attack by this variety of denim — than a pair of boot cut, flare, or straight-leg jeans.

I don’t want to totally be dismissive of Boyle’s concerns, but I really don’t get the handwringing. While I have not met any of her patients, I would like to offer a co-diagnosis of my own. I believe these cases of Meralgia Paresthetica are likely caused by another disorder I call “Pant Size Dysmorphia,” in which the patient thinks they are at least one size smaller than they actually are. (Another identifiable symptom? Muffin top!) Prescription? Facing the facts and sizing up.