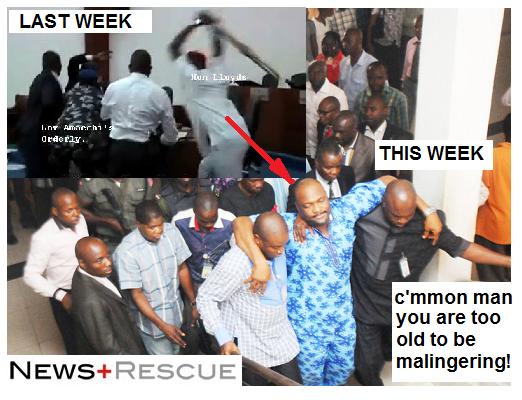 NewsRescue– The way Chidi Lloyd broke Mr. Michael Chinda’s head, was already attempted murder. Now, while we waited for justice in Nigeria’s never completing justice-not-for-the-powerful system, he has been involved in frank murder.

Lock him up and throw away the key.

The Rivers State Police Command said it had arrested the Leader of the Rivers State House of Assembly, Mr. Chidi Lloyd, for the alleged murder of his kinsman, Mr. Kingsley Ejeuo and a police sergeant, Urang Obediah.

A statement made on Thursday night indicated that Lloyd was purportedly arrested on his way to join the state Governor, Mr. Rotimi Amaechi, in his private jet in order to escape justice.

The statement sent via e-mail by the State Police Public Relations Officer, Mr. Ahmad Mohammad, specified that Lloyd knocked down Obediah while pursuing Ejeuo, identified to be his political opponent.

Lloyd, who was still standing trial for his involvement in the fracas that took place in the State House on July 9, 2013, was said to have rammed into Ejeuo’s Passat car with a bulletproof vehicle and killed him (Ejeo).

The police command pointed out that it had initially thought it was an auto accident until Lloyd relocated to another hospital, “conscious of what he did.”

“He was arrested on his way to join Governor Amaechi Rotimi in his private jet at the Airforce base to escape justice.

“Hon. Chidi Lloyd on December 30, 2013 while pursing his political opponent, knocked down Sgt. Urang Obediah, in spite of his effort to stop him, rammed and killed him and went ahead to crush the Passat car of Mr. Kingsley Ejeuo was driving and killed him.

“Initially the Police thought that it was a mere accident, which ought to have been a manslaughter. The Commissioner of Police directed ACP Aliyu Garba, the Area Commander Metro, to visit him in his hospital bed and commiserate with him, conscious of what he did, Chidi Lloyd relocated to another hospital.

“Facts emerged that Chidi Lloyd drove a bullet-proof vehicle while pursuing his political opponent, late Mr. Kingsley Ejeuo, and he (Lloyd) knocked down Sgt. Urang Obediah, who died on the spot and (Lloyd) moved ahead to smash a political opponent in his Passat car who equally died instantly,” the statement reads.

The statement added that late Ejeuo, who hailed from the same place with Lloyd was believed to be in the PDP camp led by Elder Felix Obuah.

The statement also indicated that the Leader of the House allegedly escaped from the hospital where he was being guarded by four policemen.

However, a top government official told our correspondent that the claim by the police that Lloyd tried to join Amaechi in his (Amaechi) private jet in order to escape justice was a blatant lie.

It will be recalled that Lloyd, who presented himself to the Nigeria Police after a video clip showed him hitting a member of the House of Assembly, Mr. Michael Chinda, with a mace on the head, was charged to court on a six-count charge, including attempted murder.

Lloyd was later granted bail in order to receive medical attention after sustaining injury during the July 9, 2013 free-for-all in the chambers of the State House of Assembly.
READ MORE:  http://news.naij.com/55632.html