Yahoo- LAS VEGAS – Timothy Bradley and Manny Pacquiao put on an outstanding show, but it was the judges who will be the big story for the next week or so.

Pacquiao landed 94 more punches than Bradley according to CompuBox, but it was not enough as the judges stunningly awarded a split-decision win to Bradley, who lifted the World Boxing Organization welterweight title from Pacquiao with the victory.

“I thought I won the fight,” said Bradley, who said he hurt his ankle in the second round. “I didn’t think he was as good as everybody says he is. I didn’t feel a lot of his power.” Timothy Bradley celebrates his controversial win over Manny Pacquiao. (Getty Images)

It was an excellent back-and-forth bout, but Pacquiao seemed to control it by landing more, landing at a higher percentage and landing the harder punches.

Judges C.J. Ross and Duane Ford had it for Bradley, 115-113. Jerry Roth had it for Pacquiao, 115-113. Bradley won the final round on all three cards which pulled out the bout for him.

Pacquiao was shocked by the verdict.

“I do my best and I guess my best wasn’t good enough,” Pacquiao said. “I’ve been watching the tapes of his fights. Tonight, he never hurt me. Most of his punches hit my arms. I don’t know what happened [with the scoring]. I have no problem. I’ll be ready for the rematch. No doubt [I won the fight.]”

It was a stunning end to a more than seven-year winning streak for Pacquiao, who entered the bout ranked No. 2 in the Yahoo! Sports world rankings.

“Can you believe that?” promoter Bob Arum said. “I had it 10-2! After I got into the ring after the fight, I went over to Bradley and said ‘You did very well.’ He said, ‘I tried hard, but I couldn’t beat the guy.’ This is crazy. You talk about killing boxing? All three scorecards you throw out.”

Dreams of a megafight against No. 1 Floyd Mayweather Jr. may have gone up in smoke with the pens of judges who saw a different fight than the fans in the building and most media at ringside.

Yahoo! Sports scored it 117-111 for Pacquiao, the same margin as Tim Dahlberg of the Associated Press and Steve Carp of the Las Vegas Review-Journal. Dan Rafael of ESPN had it 118-110 for Pacquiao. HBO’s Harold Lederman had it 119-109, or 11 rounds to one, for Pacquiao. 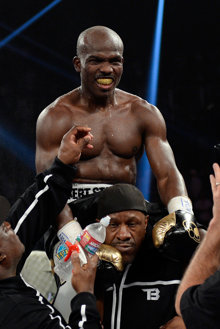 “This is a death knell for boxing, and I’m going to make a ton of money on the rematch,” Arum said.

It was an action-paced battle fought at a furious pace for much of the event. Pacquiao showed little respect for Bradley’s power and waded in with impunity, ripping straight left hands and hooks.

“He’s a beast,” Bradley said, while admitting Pacquiao hurt him several times with the left.

Bradley landed clean shots, but wasn’t able to back Pacquiao up.

Pacquiao said he respected the decision, but felt he won the fight.

From the look on Bradley’s face at the end of the bout, it appeared he felt the same way.