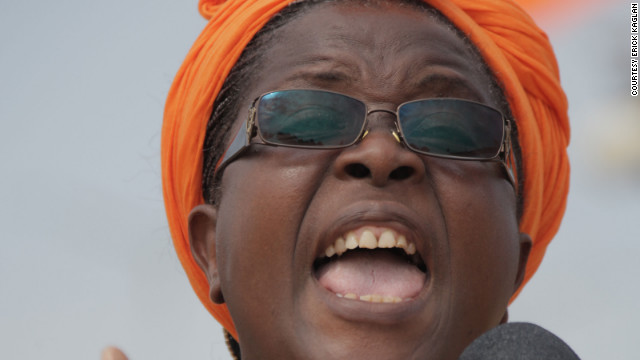 Lome, Togo (CNN) — A Togolese opposition leader is calling on women to go on a weeklong sex strike to demand the freedom of protesters detained ahead of elections in the West African nation.

Police arrested about 120 opposition supporters last week during clashes between protesters and security forces, according to Togolese human rights groups.

Government officials said all but eight had been released, and those still detained were in possession of knives.

“You don’t go demonstrate with these,” security minister Damehane Yark said of the weapons.

Demonstrators have taken to the streets in the capital of Lome for weeks to protest new electoral reforms they say favor the ruling party ahead of October’s parliamentary elections. They are seeking a repeal of changes to the electoral laws.

“I am inviting all women to observe a one-week sex strike, fasting and prayers to set our arrested brothers and husbands free,” said Isabelle Ameganvi, leader of the opposition Let’s Save Togo. “So all you ladies have to keep the gate of your ‘motherland’ locked up to all men from Monday up to Sunday.”

The opposition leader said she is inspired by Liberian Nobel laureate and current President Ellen Johnson Sirleaf, who in 2003 called on women in her nation to observe a sex strike to press for peace amid a raging war.

Sex strikes have become a common way of civil disobedience in recent years. In 2009, Kenyan women pressed for a sex strike to end bickering among coalition government officials. 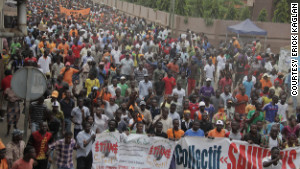 Demonstrators have taken to the streets in Togo’s capital, Lome, for weeks to protest electoral reforms.

Last year, a group of women in a violence-plagued area of the Philippines slapped men with a sex ban until they promised to quit fighting. Their stand helped end clashes in July between villages in rural Mindanao Island.

All you ladies have to keep the gate of your ‘motherland’ locked up
Isabelle Ameganvi, leader of opposition Let’s Save Togo

“We have power to change things. We do not want to remain in the kitchen, but we can have our say in politics,” Ameganvi said. “We cannot stay hand-crossed, as our children and husbands are being kept in jail.”

In addition to the sex strike, she called on women to wear a special color during a demonstration Thursday.

“You all have to be dressed up in red pants to show your anger,” she said, amid cheers.

The actions will be among a series of civil disobedience events planned.

“If our people are not released by Thursday, the women are going to rush to the prison naked to get them released, only in red pants and nothing else,” she said.

The security minister said any attempts to enter the prison will lead to arrests.

“We await them,” Yark said.” In a state of rule of law like ours, we will get them arrested for offending moral values.”

Togolese officials invited the opposition for talks Friday, but it turned down the government invitation.

“We will not hold any discussions with the government except those aimed at negotiating President Faure Gnassingbe’s departure from power,” said constitutional law professor Zeus Ajavon, an opposition supporter.

Togo has been led by the same family for more than 40 years .

Gnassingbe Eyadema ruled for 38 years until his death seven years ago. His son has led the nation since then.