Home Religion Tolerance & Respect for Other Religions is Part of the Islamic Teachings
Facebook
Twitter
Pinterest
WhatsApp
ReddIt
Telegram
NewsRescue
At last year’s Christmas celebrstions, the Leader of the Islamic Revolution, Ayatollah Sayyed Ali Khamenei, visited an Iranian Christian family to greet them on the occasion of the birth anniversary of the birth of Jesus  (as). Ayatollah Khamenei is not just a Grand religious reference in Islam, he is not just the Supreme Leader of Iran; he is the Supreme Leader of millions of Muslims – both Shia & Sunnis – the world over. That makes him among one of the most powerful men in the world.
Tolerance & respect for other religions is part of the true Islamic teachings but unfortunately the Wahhabi contamination of Sunni Islam is destroying religious tolerance in Islam & replacing it with intolerance & extremism. This is a dangerous trend that must be stopped before it reached the point of no return. Muslim youth are daily bombarded with hate & deviant extremist Wahhabi thoughts in Saudi – funded mosques & schools around the world.
According to the deviant Wahhabi teachings this humanly gesture of Ayatollah Khamenei is “Haram” & to them it tantamount to one accepting Jesus (as) as the “son of God”. The failed to understand that in Islam actions are judged according to intentions & not according to assumptions of other people.
In a heterogeneous world that we live today, religious tolerance & mutual respect & coexistence should be encouraged and propagated, & deviant extremist inclinations such as Wahhabism & Zionism condemned, rejected & discouraged. 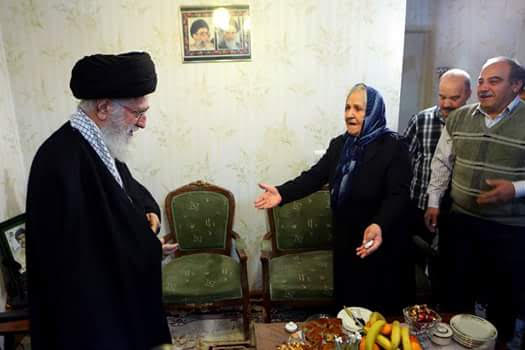 Throughout ages Islam was spread through tolerance to other religions. When the Prophet  (sa) made Hijra to Madina he met followers of three religions in Madina. He met Jews, Christians & Idol worshippers. Prophet #Muhammad  (sa) did not show any hostilities towards them, they signed Treaties & lived in peace with each other. One of the neighbors of the Prophet  (sa) was a Jew who was extremely hostile to the Prophet  (sa). On many occasions this Jew will throw the dirty refuse of his house inside the house of the Prophet  (sa). When some members of the Prophet household want to protest he will ask them no to & he will pack the dirty refuse himself. Then one day the Prophet  (sa) stopped seeing the dirty refuse from the house of the Jew, when the Prophet  (sa) asked after him he was told the Jew was sick & bedridden. The Prophet  (sa) visited him, when the Jew saw the Prophet  (sa) in his house he felt ashame & that was how this Jew accepted Islam. (Salawat ala Muhammad wa ali Muhammad).
If such a thing happen today in Wahhabi – controlled #SaudiArabia or #ISIS-controlled Raqqa, they will publicly behead the Jew & display his head as a trophy of victory or make videos of the beheadings. Islam can not be propagated through senseless killings, hate & intolerance as the bloodthirsty Wahhabis want us to believe. Islam is propagated through rational thinking, good deeds & respect for others.
Most of the Wahhabis in Nigeria thinks that with the brutal massacre of 1000+ defenseless Shia Muslims by the Zionist-controlled Nigerian Army then people will run away from Shia Islam & become Wahhabis! Such stupid naivity by the ignorance – enabled Wahhabis! Which rational & responsible person will like to join bloodthirsty savages who were openly celebrating the brutal & inhuman Zaria massacre? The open celebration of any massacre underlines the evil mindset of these people & that will never attract people that have conscience.
#FreeZakzaky
#GodProtectZakzaky
Harun Elbinawi
[email protected]