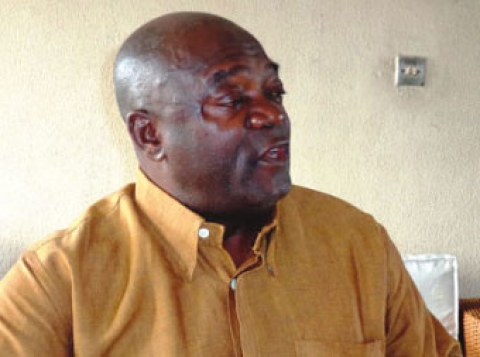 In a letter to President Goodluck Jonathan dated November 3, he explained that he had taken up the appointment “with great enthusiasm and dedication.”

But following “several meetings and wide consultations with the progressives, self-determination and civil society movements and in order not to [be] cast as a distraction or be used as an excuse to destabilize the noble cause” of Mr. Jonathan, he said he had decided to withdraw from the committee.

He traced the background of his decision to the incident in Benin City last week in which Governor Adams Oshiomhole was involved in two incidents with the committee, in the second of which he was booed at a public event.

“What became troubling was the Governor’s talking down on the people gathered; amongst who were former governors, senators, retired armed forces generals and judges,” Nyiam wrote.  “What was equally disturbing was the Governor’s insensitiveness to the ethno-nationalities yearning for self-determination,” adding that they expressed their feelings by openly boo-ing the Governor.

“Noticing the increasing protests against the Governor, I stood up and walked to the chairman, to remind him of the need to moderate, to remind the Governor that he has gone well over the time allowed for a speaker. I went back to my seat, which was on the other, far side of where the Chief Executive of Edo State was speaking from.”

While the letter does not specifically say why he has chosen to abandon the work of the committee, he apologized to whoever may have been disappointed by his over-reaction to the provocation, presumably the Benin City incident.  The concession suggests he may have been forced out of the committee.

“I will be leaving the Committee believing that equity fairness and justice will continue to be guiding principles of its deliberations,” he said.

Full text of the letter:

Through: The Secretary To

The Federal Government of Nigeria,

Resignation From The Presidential Advisory Committee

I would like to thank the President and Commander-in-Chief of our evolving Federation, His Excellency President Goodluck Ebele Jonathan GRFR, for giving me the opportunity to serve my mother land as a member of the Presidential Advisory Committee on National Dialogue.

When Mr. President, just like Nehru of India changed his mind about the desirability of a National Conference and announced on Independence Day that there will be a National Dialogue, I knew that a new dawn is around the corner.

Some of us have all our lives been   fighting for the oppressed people of our mother land, and to be given an opportunity to use dialogue to resolve our myriads of problems was too good a moment to be ignored. I took up the appointment with great enthusiasm and dedication, working as hard as my colleagues, to give our very best to our country.

After several meetings and wide consultations with the progressives, self-determination and civil society movements and in order not to cast as a distraction or be used as an excuse to destabilize the noble cause the President has put before us, I Col. Tony Nyiam rtd has decided to withdraw from the Presidential Advisory Committee on National Dialogue. I will from now on, work with colleagues from outside, using all peaceful and democratic means to bring our many decades of aspirations to fruition.

Mr. President, I will like to put the Benin event in its proper perspective so that evil propagandists bent on derailing the dialogue train will not continue to fabricate falsehood to confound Nigerians so as to achieve their devilish intentions.

It all started in the Benin consultations with us being made to be twice late for important appointments. First, we were made to be over an hour late to the 12-noon appointment we had the privilege of getting at short notice, from the palace of one of Africa’s most reputable monarchs, the revered Oba of Benin.

Secondly, we were made to keep critical South- South stakeholders, and other people’s representatives, waiting for over three hours. The two occasions of lateness to important appointments which are against the ethos of our duty, were caused by the twice, and sudden, shifting of the time we had earlier agreed to pay courtesy call to the Executive Governor of Edo State, His Excellency, Comrade Adams Oshiomohle.

When eventually granted audience, the Comrade Governor proceeded to give us a background on why he is vehemently opposed to the initiative of any leader daring to convene a National Conference. The background story was essentially a lecture on how the Governor of Edo State was, ironically, more a Kaduna- made man than an Edo indigene.

This was followed by a tutorial on how we were deluded to see anything of significance in the opportunity Nigerians are being given to dialogue amongst themselves. One instance of the Governor only knows, is his self opinionated, and sarcastic question: who initiates a process towards a meeting without a pre-conceived agenda?

To all his great oratory we (all members of the Committee) listened to quietly. As it is the democratic right of Governor Oshiomohle to speak to us. Like the late dictator, Mamman Gaddafi use to tutor for hours, his cowed Libyan subjects we respectfully listened to him. After over forty minutes of the Comrade Governors’ exercise of his human right we left the Governor’s office.

We paid homage to the Oba of Benin who with grace and above all love received us after the Committee’s chairman apologized for our coming over an hour from what was earlier agreed. We left the Great Edo Palace with the Oba’s commendation and prayers for the initiator of a pre-national conference committee, such as ours.

We got to the venue of consultations with the people to find over a thousand people eagerly waiting. We then began taking submissions. Most of the submissions, contrary to Governor Oshiomohle’s opinion came from ethnic nationalities. Later on, the Governor walked in and ran up dramatically to take his seat at the high table.

After listening to statesmen and eminent leaders of the Itsekiri, Urhobo, Isoko, Ijaw, Benin and Anioma nations making their enlightening presentations, the Governor indicated his interest to comment before departing. Rather than a few minutes’ remarks, the Governor went on, and on, repeating the lecture we had previously listened to, for about an hour in his office.

What became troubling was the Governor’s talking down on the people gathered; amongst who were former governors, senators, retired armed forces generals and judges. What was equally disturbing was the Governor’s insensitiveness to the ethno-nationalities yearning for self-determination. This they expressed by their beginning to openly boo-ing the Governor.

Noticing the increasing protests against the Governor, I stood up and walked to the chairman, to remind him of the need to moderate, to remind the Governor that he has gone well over the time allowed for a speaker. I went back to my seat, which was on the other, far side of where the Chief Executive of Edo State was speaking from.

The provocation from Governor Oshiomohle’s derogatory insinuations, and the casting of aspersions on eminent personalities such as were gathered before him, was just too much. Lest we forget, the Comrade Governor openly declared that he was not speaking as a Governor or on behalf of the Edo people. Thus he needed to be reminded that he cannot, in his personal capacity, usurp the people’s opportunity to express their feelings by themselves.

Some of our leaders need to know that they cannot continue to use the garb to obfuscate and confuse citizens and presenting as patriotism their personal agenda.

An auspicious time will come, when the obfuscation will unravel and Nigerians will come to know the true character of some of these leaders.

However, my sincere apologies to whoever may have been disappointed by my over reaction to the provocation.

I will be leaving the Committee believing that equity fairness and justice will continue to be guiding principles of its deliberations.

Like all Nigerians, I look forward to the report and will continue to believe that a better and greater Nigeria is possible.

May God bless our evolving Nigeria and its great people.