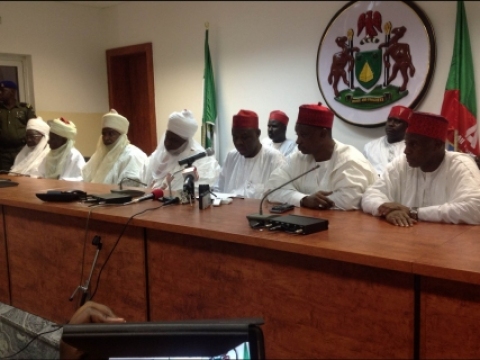 In Nigerian English, when you say traditional institutions, that mean our long existing traditional leaders, Emirs, and Kings. While in some countries like Saudia Arabia, Britain and spain, it is called Monarchy. Bahrain, oman, and kuwait called it Shiekdoms. While Morocco they called “constitutional Monarchy.

Inherited traditional leadership has been in existence for the past 10000BC or even more. Just a little thousands years after the existence of human beings. been a muslim, i can say Adam (A.S) was the first leader and he was the first human to exist. After his demise, God then chose from among his sons (the younger one) to be the leader of them as he was more pious and righteous that his twin brother. Like that they lived in peace and harmony, with leadership been automatically for knowledgeable and pious people.

Then after some time, the progeny of Adam (A.S) have increased in number, competition for better life and fame then set in amongst them, destroying the ethical norms of becoming a leader. the most powerful among them in term of strength then will automatically become their leader. Defending them and perhaps eliminating any other contender for power and loyalty.

After the settling of people, that is Africans took Africa, Europeans Took Europe, Arabs took middle east etc then the need for consistent wars reduced, then the model of becoming a leader then changed from strength to money and wealth. usually the most generous becomes the leader due to his popular appeal from the people. The next as well gets a title and so it goes.

After the coming of religions, then the most pious and knowledgeable from among them will become their leader just as it was before after Adam(A.S). in Islam, it is ‘kilafah”. There are 4 rightly guided “Kalifa” of prophet Muhammad (S.A.W). The Kilafh only existed for about 40 years or so. After that, then from among those that were fortunate to become leaders then started to call themselves ‘Sultan”, “Caliph” etc.

In Africa here, after the colonialization of Africa by the west, they removed and installed leaders from among thier loyalist as “traditional leaders”. The selected leaders than in turn chose from among their loyalist divisional heads and other tittles. then that was when ‘inherited traditional leadership’ sets in. they ruled for about 40 years before the independence of Nigeria. What they normally do was, the eldest son of the king will inherit the throne and becomes Emir, Chief, Kabesi, Oba, or what ever they named him.

It was not surprising that even after independence, it was traditional leaders that were ruling Nigeria. In the North for example, every first class emir was a minister port polio in the then premiers cabinet. It was obvious that they were the ones ruling as most of then ministers, and important positions were their children and relatives, thus, some of them were mere extension of the traditional leaders they were the ones that got them there.

It is obvious now 14 years after the return of ‘De more crazy” that the traditional institutions still want to be part of the system as many of their children are now Senators, Governors, and Ministers. That means unlike the previous method of acquiring power, the traditional institution wants to stay for ever. While we the Talakawas ( the masses) will not and perhaps never be allowed to have the share of leadership not even for a while.

One popular politician in the 60s predicted that there will come a time when people will no longer pay homage to the traditional
institutions. He even went further to say that the traditional leaders will leave their palaces and come out watching the masses they no longer visit them. People will only strech thier hand and say “good morning sir’ and leave. Well may be not now as i see no sign of those traditional institutions loosing grounds, may be as he said, in the future.