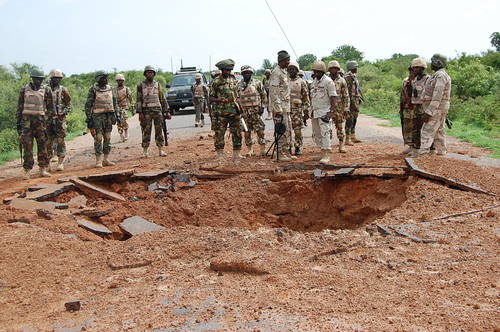 Boko Haram militants today detonated a roadside bomb after ambushing a combination of soldiers and hunters in Mararaba near Mubi in Adamawa state.

At least 10 soldiers and 35 hunters were killed in the ambush that happened around 6PM Nigerian time according eyewitnesses and military sources.

A Nigerian army source said they could not immediately comment on the level of casualty but stated they were aware of the attack and still investigating.

Mararaba is 18 kilometers from Mubi, a township recently overrun by Boko Haram  sect militants.
However, a push by hunters backed by Nigerian troops forced Boko Haram to beat a retreat in the area.

Our army source said some 100 Boko Haram militants have been killed in the area between Sunday and Wednesday night in renewed operations to recover territory from the militants.