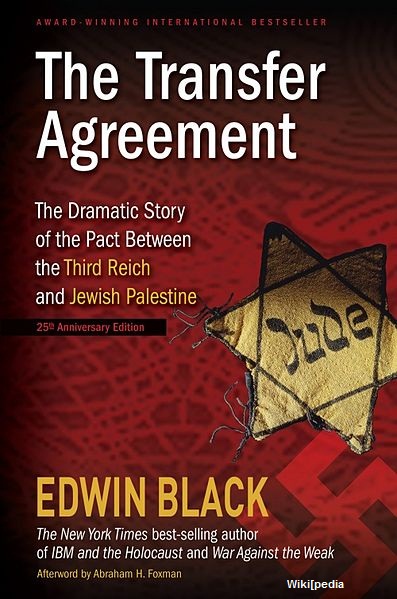 The Transfer Agreement: The Dramatic Story of the Pact Between the Third Reich and Jewish Palestine is a book written by author Edwin Black, documenting the agreement between Zionist Jews and Adolf Hitler to help create a Jewish state in Palestine, in return for an end of a global boycott of Nazi Germany that had threatened to bring it down in its first days of power.

This book documents the agreement between Adolf Hitler and an organization of Zionist Jews in 1933, which made Hitler “the chief economic sponsor of the state of Israel”. A sweeping, worldwide economic boycott of Germany by Jews helped spur a deal between the Nazis and Zionists[1]. At that time, there were few Jews in Palestine, but from 1933 through 1936, 60,000 German Jews immigrated into the region, bringing with them $100,000,000 dollars ($1.6 billion in 2009 dollars)