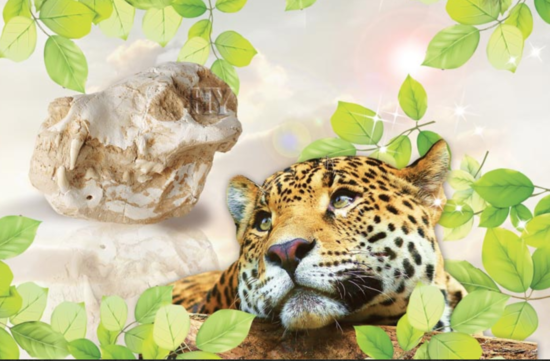 The theory of evolution claims that a particular species transforms into a brand-new species with very small changes. However, to prove such a claim it is necessary to find proof of these transitional species with the aforementioned changes and to present them as scientific evidence. The alleged transitional species must originate from an imaginary ancestor species and possess new developing organs, systems or limbs. However, such imaginary transformations, which involve trial and error and are claimed to have lasted for millions of years, will result in an unsuccessful transitional species with half-limbs or missing organs. It is interesting that THERE IS NOT EVEN A SINGLE TRANSITIONAL FORM in the fossil record that would bear witness to such changes. Contrary to the expectations of evolutionists, the fossil record is instead full of species with intact and complete organs and systems. This shows us that the millions of species we have witnessed so far all had the same characteristics 100 million years ago.

There is NO CHAOS in the fossil records

It can be expected that a world governed by coincidences would bring along chaos as well. In such an imaginary system, it is impossible for species to have symmetry or aesthetics. Even the existence of life itself would be impossible in a world prevailed by coincidences. Mutations, claimed to be the so-called mechanism of evolution, lead to distortions and deficiencies in DNA, and as a result, distorted and irregular structures, defects in organs and systems occur. According to the claim of evolution, we should frequently encounter fossil samples of different species that have undergone mutation, and therefore have not survived and went extinct. However, there is not even a single sample of it.

This fact, posing a problem for the evolutionists, was first admitted by Charles Darwin:

“Why if species have descended from other species by insensibly fine gradations, do we not everywhere see INNUMERABLE transitional forms? Why is not all nature in CONFUSION instead of the species being, as we see them, WELL DEFINED?” (Charles Darwin, The Origin of Species, p.108)

Despite being the founder of the theory, Darwin admitted that the fossils, witnessing the history of life, were not confusing and that the fossils were perfectly in order. Strange- looking transitional species have never existed throughout history. The very moment a species appeared in the fossil record, they had intact organs and symmetrical limbs.

There is no such thing as “Innumerable Transitional Species”

We always find fossil samples of complete and intact species in the fossil record. Some of them belong to species that emerged with perfect limbs and organs, and then went extinct, and some belong to existent species that emerged millions of years ago with their perfect and present appearance. As claimed by evolutionists, the intermediate forms, which developed intermediate features that proved to be disadvantageous and caused the extinction of that species, certainly do not exist. The fossil record offers NOT A SINGLE FOSSIL OF AN INTERMEDIATE FORM.

According to the claim of evolution, the number of imaginary transitional species is supposed to be geometric multiples of the number of species known today. The so-called evolutionary tree must be full of unsuccessful species and must have innumerable subsections that have ceased to exist. This number could have been expressed in the trillions. Charles Darwin always emphasized that the amount of transitional species, which he hoped for but never found its existence, is INNUMERABLE:

INNUMERABLE transitional forms must have existed, why we not find them embedded in COUNTLESS NUMBERS IN THE CRUST OF THE EARTH?.. Why then is not EVERY GEOLOGICAL FORMATION AND EVERY STRATUM full of such intermediate links?” (Charles Darwin, The Origin of Species, p.172-280)

As Darwin pointed out, if the claim of evolution were true, almost every geological stratum would be full of such unsuccessful attempts, namely strange-looking transitional forms. These imaginary transitional life forms, trillions of which should be found in every fossil layer thus far excavated, should have been encountered by now; however, the situation is exactly the opposite. Fossils refute evolution by not showing a single transitional form.

The fact that species have remained unchanged

Paleontology, the study of fossils, reveals that species have not changed and have always remained stable throughout the time they remained on earth. The famous evolutionist paleontologist Niles Eldredge also stated that this is an undeniable fact:

It is an obvious fact that species emerged on the earth fully developed and have remained unchanged throughout their existence. This is a situation that can never be contradicted by any paleontologist and is always confessed. One of the leading evolutionists, American paleontologist and science historian Stephen Jay Gould, wrote the following about these two most prominent features of the fossil record:

The history of most fossil species includes two features particularly inconsistent with gradualism:

(1) Stasis. Most species exhibit no directional change during their tenure on earth. They appear in the fossil record looking much the same as when they disappear; morphological change is usually limited and directionless.

(2) Sudden appearance. In any local area, a species does not arise gradually by the steady transformation of its ancestors; it appears all at once and ‘fully formed.’ (S. J. Gould, “Evolution’s Erratic Pace”, Natural History, vol. 86, May 1977)

Gould again continues his confessions in an article in the Natural Historymagazine as follows:

Statis, or non-change of most fossil species during their lengthy geological lifespans, was tacitly acknowledged by all paleontologists, but almost never studied explicitly… The overwhelming prevalence of stasis became an embarrassing feature of the fossil record, but left as a manifestation of nothing (that is, non-evolution). (S.J. Gould, “Cordelia’s Dilemma,” Natural History, 1993, p. 15)

Atlas of Creation and Fossils Say ‘We Have Not Changed’

As is seen, comparing fossils with their living counterparts and showing that they have not undergone any change is nothing but disclosing a well-known fact to the public. This fact, which has always been withheld from the public, reached and was spread to the public at large through the Atlas of Creation, the magnum opus of the author Adnan Oktar, writing under the pen name Harun Yahya. Paleontology has shown that species do not emerge slowly in millions of years as claimed, but that they emerge miraculously, in their perfect forms. With the work of Mr. Adnan Oktar, the findings and fossils that have been hidden from the public for so many years have been revealed at last and the secrets of the evolutionists have been shown for all the world to see.

Although this extraordinary piece of work exhibits only about 2,000 fossils in detailed photographs, the number of classified fossils that are stored in repositories in universities or in museums with date tags, is about 700 million. The fact that some evolutionists, who feel upset about these facts write stories about merely three or four fossils out of the thousands mentioned in the Atlasand try to make unfair criticisms shows just how desperate they actually are. These criticisms are far from being scientific and typically do not go beyond ill-advised sarcasm as obviously, in the scientific literature, there are thousands of other examples of the fossils in question.

Evolutionists claim that humans share a common ancestor with chimpanzees. Speculations go on and on, one day claiming that chimpanzees are closer to humans, and the next the bonobos. While there is no evidence of any transformation, according to what exactly can Darwinists establish a relationship between those two? At this point, evolutionists produce statistical formula that they invented from scratch and which have no scientific validity.

The deception here is based on the comparison of some selected base-pairs of specific genes of the two species. Here it should not be assumed that all the codes of the two species’ genomes have been compared one by one. This fact is better understood when we examine this trick used to create the imaginary family tree:

When studies of genetic similarity between man and apes are conducted, only certain genes are compared. For example, while drawing the family tree of living primates, 34,927 base pairs of 54 genes were considered. There are about 25,000 genes in the human body and not all of them are compared here.

Evolutionists initially claimed that there is a 1% difference between the chimpanzee and the human genome, but later this difference was generally accepted as 4%; this rate corresponds to about 35 million nucleotides. Evolutionists are in search of an imaginary mechanism in which this difference is made up. Therefore, they suggest mutations that altered the DNA, added or subtracted codes, all of which would completely harm the organism. They claim that history worked backwards like this and that mutations worked regularly, and had only beneficial effects all the time- which in fact is impossible – and thus they make fake calculations about the dates when the two species may have split. There is no fossil of the imaginary common ancestor, and there are no intermediate species either; nevertheless, evolutionists present calculations, which do not have scientific validity, as if they are true under the rubric of “prediction” to the public. The imaginary data, entered into a computer on the basis of this claim, is executed under the name of the Bayes formula and the lie that they can reach out to their imaginary common ancestor that existed some five to seven million years ago as a result of the calculations made through this imaginary data, is put forth.

The Bayesian Approach in Statistics and Scientific Errors Arisen from Presupposition

The Bayesian formula used in some statistical calculations enables a retrospective analysis of a particular claim. The Bayesian formula is used to calculate conditional probabilities. So if a person claims that ‘two species were derived from a common ancestor’, the formula works to verify this fake hypothesis and calculates how many millions of years must elapse to make up the 35 million nucleotide difference. In reality, however, the 35 million nucleotide difference has never been made up, but the formula provides a result because the claim is entered in this way. Therefore, the Bayesian approach is regarded as a scale of a person’s belief for any fact rather than physical evidence.

As we can see, the gaps in the genes are closed in the minds through computer formulas, and the history of life is arbitrarily written. It is evident that such studies, carried out through the postulate of ‘evolution exists’, have no scientific aspect and completely serve ideological purposes. This mentality, which is far from being able to explain how even a single gene, encoded with information, emerged by itself, uses genetics as a cover.

Paleontology, histology, biochemistry and all other branches of science reveal that life is so complex that it is not possible for it to have come about by pure chance. All species, a single cell – and even a single protein belonging to these species – constitute indisputable proof for the infinite knowledge and power of God.