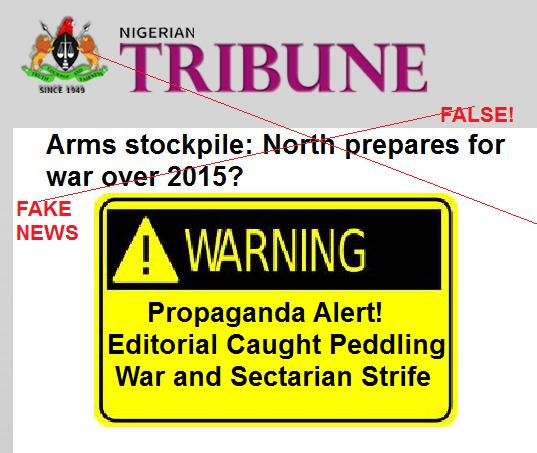 NewsRescue- As the Boko haram threat that at a stage seemed to be the crack that would render Nigeria into bloody chaos and sectarian war, gets resolved, mischievous elements in the Nigerian media, who have been known in the past to intentionally distort information and stoke flames of ethnic and sectarian tension, are at work again.

This time the culprit is the Tribune newspaper. Back to back, two articles, yesterday and today by Nigerian Tribune have invented and promoted a ludicrous and preposterous tale of the north of Nigeria gathering arms for 2015 war. The first story written by Olawale Rasheed, was invented, connected to a US report from the US war college.  The Tribune publication was captioned, “2015: North prepares for war •Beware of another civil war, US report warns Nigeria“. The caption is total hubris. The entire US report can be downloaded on this link. It will immediately be noticed that there is no reference to a so called preparation for war by the north in the US report. Absolutely no similar or related reference in the entire US article to the Tribune headline. The reasons why the Tribune article fabricated such in their heading can only be that they do not like peace. They are sad that Boko haram is being contained and they wish to add fuel to make a new fire.

Following up closely was another article (Arms stockpile: North prepares for war over 2015?) on the 21st of July (Today), in which Tribune author, Tayo Babarinde, wrote expansively on a so-called northern ammunition stock-up for 2015 elections war. The evidences in the article included a recent report that Zamfara state governor had imported arms to give to a state vigilante force he claims he uses to fight crime. This story, even though accurate has no bearing and connection to a broad northern weapons accumulation project.

The rusty weapons found recently in Kano, linked to Hezbollah, that were suspected to be connected to Nigeria’s former and serial NSA, Aliyu Gusau, and were found buried in a bunker in some Lebanese’s house, was also connected to make some kind of complex conspiracy. From the images of the weapons, they were very rusty and had been imported and buried God knows how long ago. The purpose of these weapons was also stated by the security services, as being for anti-Israeli and US interests.

The pathetic Tribune story finally added a recent shootout with Boko Haram suspects in Jigawa state, claiming that the weapons recovered from this shoot out are part of the 2015 northern arsenal.

It is really shameful how junky Nigerian editorials and journalists are. NewsRescue recently revealed how senate proceedings that led up to the public chaos, were actually not about child marriage as the media publicized, but about the rights of women who are married, regardless of the age they marry. The right in review, was their right to renounce Nigerian citizenship–in seeking asylum for instance. Senator Yerima and 35 other senators voted to keep the law as is, giving these young wives the full rights of adults, to make decisions including citizenship renouncement, divorce, etc. Nigeria’s media has been awash with shameful misinterpretation of the

happenings, which had nothing to do with child marriage. Our article here explains. Sadly, it is evident that many of Nigeria’s senators who voted to delete the law, are slightly more than barely literate and the Nigerian press is no better. See error and ludicrous journalism in Punch, AllAfrica, Dailypost, Naij, SaharaReporters, to point out a few irresponsible editorials that assumed the proceedings had something to do with enabling child marriage.

These malicious journalists feel that they can simply invent and throw any insult and fabrication against the predominantly Muslim Hausa-Fulani north and it will stick. Not so, there is NewsRescue to filter news, north and south. What is most peculiar and incandescent about their desperate tactics, is that the north is always referred to in entirety as being united in a huge conspiracy, rather than the elements within states being reported under crime headings as is done in publications when syndicates are found in the south.

The reality of the situation however is that there is concrete evidence including the fact that the president of Nigeria officially hired Niger Delta terrorists, Asari Dokubo who regularly threatens the nation, and Tompolo, with millions of dollars to ‘protect’ southern pipelines, that these terrorists have been stockpiling advanced weapons in the creeks.

The Boko haram northern threat, and cause of weapon proliferation and insecurity in the north, has been largely controlled and is expected to soon be checked, thanks to the concerted efforts of the military and civilian JTF.