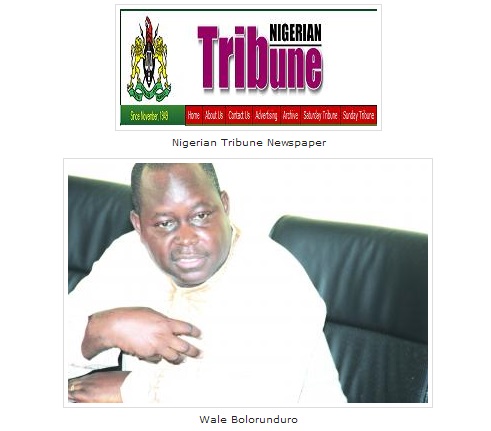 I’m PERSONALLY compelled to write this because history will be harsh on those who fail to say the truth when it matters most.

Since yesterday evening, one of the PDP loyalists and rumour peddlers, Akintunde Bello Sherrif, posted on his facebook account that a gentleman, Mr. ‘Wale Bolorunduro, was ARRESTED by the Police in Delta State.

I, like other like minds confronted him to produce evidence(s) to back his claim but he and his cohort went wild, throwing caution to the wind.

I took it as one of the normal lies written by paid agents of politicians to smear the image of perceived ‘enemy’ of their masters and the social media which is unlicensed provides cover for such venture.

As I woke up, I decided to check the newspapers online and I saw the above caption on Nigerian Tribune website. I almost cried! Why? It’s for the future of journalism. Why would journalists be too lazy and hasty in making conclusion about a story when the entire body of the report was full of comments from the opposition side?.

To justify that the story was true, the name of the Delta State correspondent of the medium, Mr Alphonsus Agborh was joined as a byline.

While I don’t have any regret whatsoever about the content of the report, I’m highly bewildered that the story emanated from a newspaper whose proprietor stood for truth all his life. Tribune shouldn’t have stooped so low for any party in that regard.

While I recognize the fact that there is no news medium without political affiliation and sympathy, so also is the fact that politicians would always try to portray themselves in good light, even when they aren’t.

However, the place of investigative and balanced journalism shouldn’t be left out.

When a news medium feeds people with lies most times, it tends to lose credibility.

I make bold to state that the report was money-induced in order to smear the image of Ogbeni Rauf Aregbesola through one of his appointees who happens to be the Commissioner for Finance.

This is part of the PDP’s several failed attempt to win cheap popularity ahead August 9, 2014 gubernatorial election in the State of Osun.

Though they were half-clever, they monitored the commissioner’s movement to the extent that they knew he was going for a social event in Delta State but they were unfortunate. As fate would have it, Mr. Bolodunro missed his flight. He then stayed with his family over the weekend.

In the hogwash, Tribune said “Osun State Commissioner for Finance, Dr Wale Bolorunduro, was on Friday evening reportedly arrested by men of the Delta State police command in Warri, Delta State alongside some security escorts but was released on Saturday morning”.

Even if it were true, I wonder what moral ground the PDP has to call for a thorough investigation into the matter when they were silent while former governor Isiaka Adeleke was allegedly almost killed by PDP’s agent.

While I’m not holding brief for the APC, I will like to alert the public to disregard the PDP’s legal adviser’s claim that “the All Progressives Congress (APC) government in the state had been recruiting all manners of thugs from all parts of the country for the August election and that the commissioner’s arrest with armed escorts vindicated their allegation”.

Since the coming of Ogbeni in 2010, the activities of thugs have been reduced to zero-level as those who were handed guns and other dangerous weapons pre-Ogbeni’s area were rehabilitated and to the glory of God, some of them are enjoying their new statuses as normal citizens.

If your claim is true that “Police sources said though the commissioner claimed he was in Ughelli to attend a ceremony, he was queried over how he came about the escorts who came in a bank’s security van with upturned registration number BDG 618 AA…”, why is that other newspapers didn’t carry the story.

Mr. Wale has said it all while reacting to the lie, saying “Ask them to produce their report; at least if they arrested anyone, there should be a report. On Thursday, I wanted to go to Delta State but I could not because I was with the governor on the programme, Gbangba D’ekun. I went to Lagos on Friday morning, thinking I would catch a flight to Delta but I didn’t get any. So I stayed back in Lagos with my wife and family. You can send a reporter to me in Magodo, I am there presently as we speak.”

“I don’t know where they got that story from and it is not fair bringing my former employer into that kind of dirty politics,” he said.

I wonder why the “Police” were unable to come out briefly to ascertain the ‘arrest’ because Tribune claimed that “According to police sources, who claimed they were yet to conclude investigation into the matter, the Osun commissioner admitted that the security escorts were with him after two of the escorts were arrested, while the others fled”.

I will not be surprised if by tomorrow, another story surfaces to support this ignorance, because the story went further that “the commissioner and the escorts, according to sources, who were transferred to Asaba in the early hour of Saturday, were released on the orders of the state Commissioner of Police, Mr Ikechukwu Aduba, while the police public relations officer, DSP Celestina Kalu, insisted that investigation into the matter was in progress”.

They know how to justify lies but the people are wiser than before.