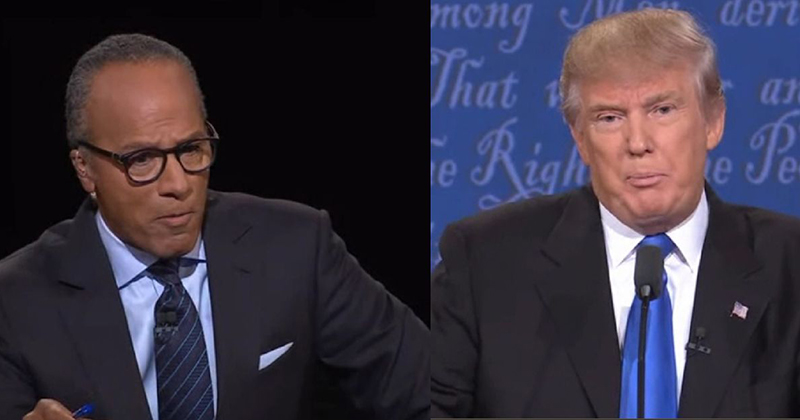 GOP nominee Donald Trump reacted to last night’s debate this morning by noting that debate moderator Lester Holt of NBC News failed to question Hillary a single question about any of the controversial subjects that have dominated headlines over the past year and more.

Appearing on Fox & Friends, Trump stated that he believed Holt’s questioning to be unfair toward the end of the debate:

“When you look at the last four questions, hit hit me on birther, he hit me on a housing deal from many years ago that I settled with no recourse… that’s a beauty to be asked. about a 40 year old law suit.” Trump said.

“They were leaving all of her little goodies out” Trump continued.

The only time Clinton’s emails were raised was when Trump fended off a challenge by Holt over why he had not released his tax returns.

When Holt asked Trump if it was negotiable to release his tax returns, he replied “It’s not negotiable, no. Let her release the emails. Why did she delete 30,000–” before he was cut off by Holt who told the crowd they needed to be silent during the debate.

“I thought Lester was really good for the half, because he was bringing up general and main subjects that were important… But then at the end they start bringing up 45 year old lawsuits.” Trump said.

Trump noted that he would give Holt a C or a C+ as a grade, adding “I thought he was fine, but he gave me very unfair questions at the end, but I’m not complaining about that, I thought he was OK.” –IW