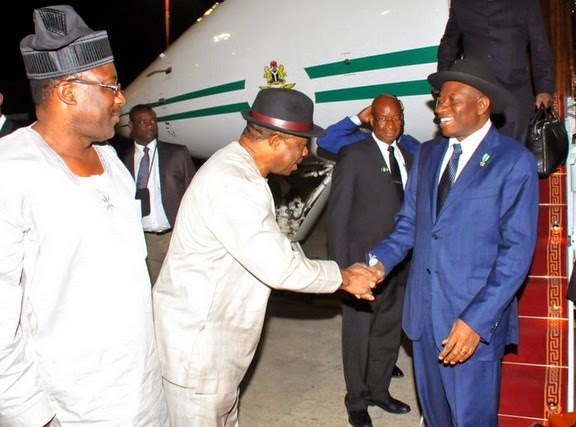 Clearly attempting desperately to reduce the 2015 presidential election to a religiously divided issue, Jonathan goes to Jerusalem again for the second time in 2014; this time purporting to be on pilgrimage.

It is recollected that after the Stella Oduah criminal embezzlement scandal with Coscharis motors; Jonathan, Pastor Ayo Ortisejafor and Stella Oduah were seen in Jerusalem.

President Goodluck Jonathan will on Friday depart Lagos on a brief pilgrimage to Israel, his office said in a statement on Thursday.

The statement issued in Abuja by Reuben Abati, the Special Adviser to the President on Media and Publicity, said Mr. Jonathan would visit Christian Holy sites during the pilgrimage.

According to the statement, he will join other Nigerian pilgrims in a prayer session for the well-being and progress of the country at an Inter-Denominational Service in Jerusalem on Sunday.

The president, who will be accompanied by the Chaplain of the Presidential Villa, Obioma Onwuzurumba, and his principal aides, is expected back in Abuja on Monday.

Mr. Jonathan’s office did not specifically identify the aides accompanying him on the trip but the President is known for travelling with outsized delegations on foreign trips.

Mr. Jonathan’s trip to Israel, which is his second in 12 months, is coming about four months to the 2015 presidential election in which he is most likely to run as the candidate of the governing Peoples Democratic Party [PDP]. The Independent National Electoral Commission [INEC] has fixed February 14, 2015 for the next presidential election.

During his last visit, Mr. Jonathan met with President Shimon Peres and Prime Minister Benjamin Netanyahu as well as with members of the Israeli Parliament, the Knesset.The president had on October 23, 2013, embarked on a similar trip which he combined with an official visit to Israel.

“As you know, the election is approaching and the president needs all the prayers and spiritual blessings he can get,” one of his aides, who asked not to be named because he was not authorised to speak on the matter, told PREMIUM TIMES. “He is going to fervently pray for success in the coming election and for peace to reign in this country.”

The aide said the President has become especially spiritual of late and that it was not a surprise that he was going to commit himself to God as he stands for reelection.

During his last pilgrimage, Mr. Jonathan visited Jerusalem where he led other Nigerian pilgrims in a special prayer for the numerous challenges facing Nigeria.

Leading the intercessory prayer session at the Chapel of Dominous Flevit (where Jesus wept), the President particularly prayed for God’s intervention in the current political and security challenges in Nigeria.

The president also visited Mount Olives, Garden of Gethsemane, Bascillica of Agony and Mount Zion where he also prayed alongside other pilgrims at the Upper Room (where Jesus had the last supper with His disciples).

Other places he visited included David City, The Church of St. Peter in Gallicantu, the last place where Jesus was kept a night before he was crucified.

The president and other Nigerian pilgrims also walked down the Palm Sunday Road to the Chapel of Dominous Flevit.
He also visited the Jerusalem Old City, The Wailing Wall, Golgotha, Pool of Bethesda and other holy sites.
It is not clear whether he plans to revisit these holy sites this time.

Eight governors, seven ministers and three members of the National Assembly accompanied the President to Israel for that pilgrimage.

The governors were Theodore Orji of Abia; Peter Obi of Anambra; Godswill Akpabio of Akwa Ibom; Martin Elechi of Ebonyi; and Emmanuel Uduaghan of Delta; Gabriel Suswam of Benue; Jonah Jang of Plateau, and Liyel Imoke of Cross River.

Members of the National Assembly in the presidential pilgrimage at the time were the Senate Committee Chairman on Power, Philip Aduda, and Paul Paulka.

The president’s office is yet to release the names of officials accompanying the President on this year’s pilgrimage but PREMIUM TIMES sources say no fewer than 70 travel documents were processed for the trip.

Pictures from his last trip 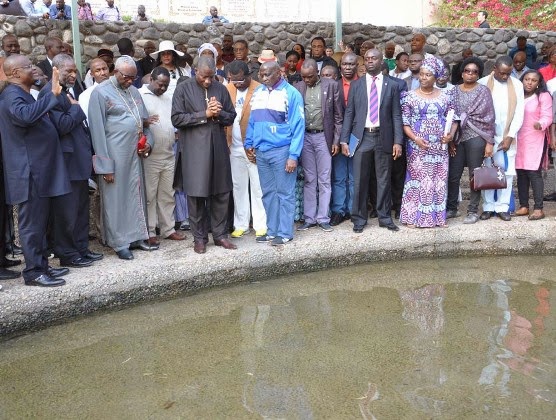 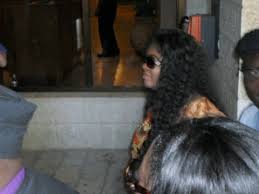