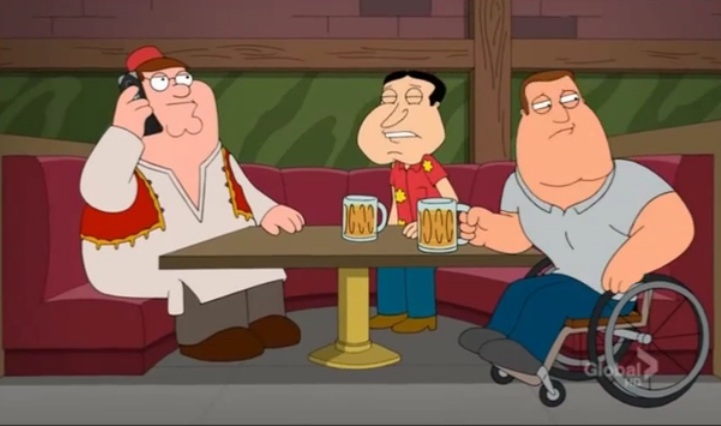 NewsRescue- There is a most weird story making the rounds on the internet. A March 17th episode of Family Guy, “Turban Cowboy,” in which Peter Griffin “converts to Islam,” appears to have in some sort of joke, displayed scenes that are eerily predictive of the Boston marathon bombing. Apparently, because two of the scenes in the same show, were put together to underscore the accuracy, according to Wikipedia, Fox took advantage of the re-combination for effects, youtube clip of the episode, called it a “Hoax,” and started deleting the entire episode from Hulu, etc.

We culled this from Wikipedia, under “Turban Cowboy.”

After the 2013 Boston Marathon bombings, a clip circulated on the Internet using footage from this episode edited together to make it appear that Family Guy predicted or inspired the bombings. The theory was first put forth by radio talk show host Alex Jones on his website and on Twitter. Family Guy creator Seth MacFarlane tweeted to denounce the hoax, calling it “Abhorrent.” YouTube subsequently removed the clip from its service, and Fox removed the “Turban Cowboy” episode from Fox.com and Hulu. Source: http://en.wikipedia.org/wiki/Turban_Cowboy

Washingtonpost actually confirmed the clips and them being pulled by Fox in an AP report which states that these clips in the recent Family Guy episode depicted “mass deaths at the Boston Marathon.”

You can read this shocking revelation here: http://www.washingtonpost.com/national/fox-pulls-family-guy-episode-referring-to-deaths-at-boston-marathon-no-plans-to-re-air/2013/04/16/87620160-a6e3-11e2-9e1c-bb0fb0c2edd9_story.html

We at NewsRescue, even though we enjoy satire, we understand and are firmly against comedies and shows making mockery of life and sanctities of the living, and playing around with death and deadly situations.

Family Guy possibly made an innocent joke that happened to almost identically play out in the future, or someone took a cue from the Family Guy show, or there is much more to this. In any case, we believe such satire is out of place in a modern world. There needs to be media responsibility. Or perhaps everyone will watch Family Guy from now on to “know what could possibly be coming.”

Alex Jones’ InfoWars has been labelled “Abhorrent,” for bringing the observation to public notice. However the producers of Family Guy have not yet been reprimanded, not surprisingly, for airing such a terrorist show and eerie, bizarre “predication.”

A warning of impending death at the marathon, given to Boston marathoners before the event is also worth noticing:  “Mike Heiliger, 59, said a woman holding several bags was telling runners who were picking up their pre-race packages in downtown Boston on Saturday (April 13) that they were going to die if they participated in the event,” reports the SquamishChief.com. 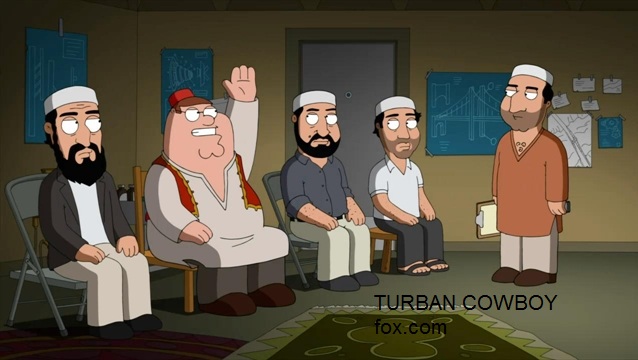 “Turban Cowboy” is the fifteenth episode of the eleventh season and the 203rd overall episode of the animated comedy series Family Guy. It aired on Fox in the United States on March 17, 2013, and is written by Artie Johann and Shawn Ries and directed by Joe Vaux.

Due to the events of the 2013 Boston Marathon bombings, two scenes were deleted from the episode:

One scene shows Peter killing participants of the Boston Marathon:

At 3 minutes, 33 seconds into the episode: As Peter is skydiving:

Peter: Holy crap, this is awesome! I haven’t felt a rush like this since I won that marathon!

Cue flashback: Peter is speeding his car, killing runners at a marathon

Cue news interview after marathon killing: Bob Costas: I’m Bob Costas, here with Boston Marathon winner Peter Griffin. Peter, how did you do it? (background image shows Peter smiling in his blood-drenched car, raising a clenched left fist as he crosses the finish line past many dead bodies) Peter: I’ll tell ya, Bob, I just got in my car and drove it. And when there was a guy in my way, I killed him.

At 15 minutes, 6 seconds into the episode Inside of a tavern:

Joe: Peter, I think you joined a terrorist sleeper cell.

(Peter dials phone) (An explosion sounds in the distance)

There are a lot of strange coincidences surrounding the Boston Bombing. This family guy episode and the Boston police conducting bomb drills, Bomb spotters on the roofs, bomb sniffing dogs at the finish line?

And the host of video clips: