Horror novelist Stephen King may pay his bills by inventing stories, but he was accused of taking creative license with health data, saying 1,200 Floridians died of Covid in one day – a claim that remains up despite being untrue.

“1200 dead of COVID yesterday in Florida,” King, who lives in both Florida and Maine, tweeted on Friday. “Not the total for a week or a month, but ONE SINGLE DAY.”

1200 dead of COVID yesterday in Florida.
Not the total for a week or a month, but ONE SINGLE DAY. 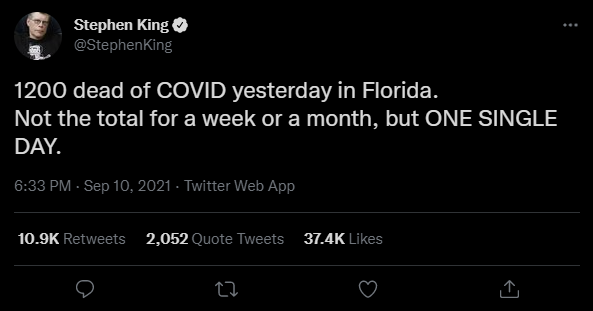 Though King’s tweet has yet to be flagged or taken down by Twitter for spreading misinformation, it’s unclear where exactly he is getting this daily death figure from.

Like multiple other states, Florida stopped reporting daily deaths in June. Instead, they now present seven-day rolling averages, which many experts believe to be a much more accurate metric for pandemic trends.

As Miami ABC affiliate Local 10 explained in their reporting on the ‘1200 deaths’ from Covid-19 on Thursday, “those deaths did not all happen over the past day and span back weeks.”

King must not have read that report or been aware of the difference in daily Covid-19 deaths versus backlogged data being added to a total death count, but plenty took the novelist at his word and spread his falsehood across social media.

Neither one of these people will have their tweets flagged for misinformation. #science pic.twitter.com/kNhBoh5BJB

King is not the first to make this mistake in a rush to criticize Florida and Governor Ron DeSantis, whose star in the Republican Party has quickly risen as he’s become one of the most vocal opponents of federal Covid-19 mandates.

Multiple local outlets previously reported a daily death count of over 900 on August 26 in Florida, making the same mistake King appears to have made in confusing deaths added to the state’s tally with the actual number of deaths on a given day.

Were the alleged 1,200 number actually true as a daily figure, it would’ve spelled pretty bad news for Florida, considering the state had a total of approximately 7,600 deaths in the month of August, with a daily average of 245. King’s number was also higher than the seven-day average of deaths in Florida as of September 9, which is 338. There’s little surprise that those who took his misleading tweet at face value were shocked and outraged.

Though King’s tweet has yet to face any consequences from Big Tech, plenty of users were quick to label the President Joe Biden supporter a “liar” and to link him to accurate reporting proving his statement to be false.

“As usual, this isn’t true,” National Review’s Charles C. Cooke tweeted, linking to a local report explaining the 1,200 deaths did not occur on one single day.

As usual, this isn’t true. https://t.co/ytt1zrc4FG

“This is fiction. It is what [Stephen King] does best,”added conservative actor and filmmaker Nick Searcy, who starred in the ‘11/22/63’ adaptation of King’s novel.

FALSE. "Those deaths did not all happen over the past day and span back weeks. The backdating of fatalities shows now that more than 7,600 people died in Florida in August. That equates to an average of 245 deaths per day in August."https://t.co/xMFlo4grso

King has been supportive of Biden’s recently-announced vaccine mandate, even saying on Thursday the president’s sudden reversal – he was previously opposed to mandates – is a sign of an “intelligent mind.”