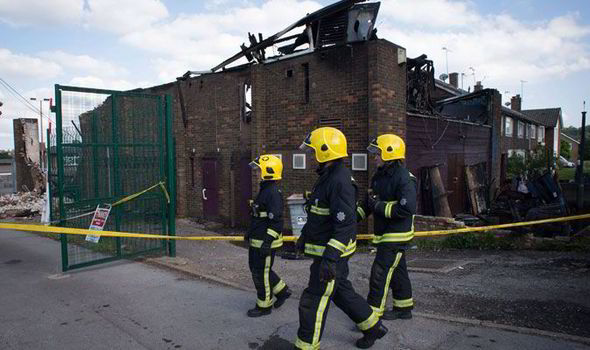 NewsRescue- UK daily metro today released new data indicating a rise in anti-Muslim attacks from one-per-day to eight-per-day, since the Woolwich slaying of a British soldier.

The EDL, English Defense League has been vocal and outspoken in their “genocidal thinking” campaign against Islam. A Somali Muslim center that was burned to the ground, had “EDL,” inscribed all over it. The leader of the EDL in a BBC interview today that has sparked much fervor, denied his groups involvement.

Again yesterday, four teens were arrested on suspicion of setting fire to an Islamic boarding school. The Guardian goes:

Four teenagers have been arrested in connection with a fire at an Islamic boarding school on the outskirts of London. The four suspects – two aged 17 and two aged 18 – were detained on Sunday night on suspicion of arson at the Darul Uloom school in Chislehurst. The blaze is being treated as suspicious and the four remain in custody at a south London police station.

Concerns have been raised after a Somali cultural centre was burned to the ground in Muswell Hill, north London yesterday.

The building, daubed with the letters “EDL” in an apparent reference to the English Defence League, was targeted in a racially motivated attack, according to the Metropolitan Police.

The blaze came as the RAF Bomber Command War Memorial in Green Park, central London was defaced again after being attacked by vandals last week, this time with the words “Lee Rigby’s killers should hang”.

Muslim representatives are pleading with police to clamp down on Islamaphobic attacks, and are appealing for solidarity throughout their communities. Police say the blaze was targeted in a racially motivated attack
It is time for serious action against such crimesFarooq Murad, secretary general of the Muslim Council of Britain

Farooq Murad, secretary general of the Muslim Council of Britain, said: “This is the latest in a series of attacks on Muslim institutions since the horrific murder of Drummer Lee Rigby.

“The British Muslim community came out in droves to condemn this murder, and it is despicable that Muslims should be held to account and suffer in this way.”

He added: “It is time for serious action against such crimes. We had fine and decisive words from our leaders condemning the actions of the English Defence League, now we need a proper response from our police authorities, starting with a national police response to this issue.

“Admirably, local police forces and borough commanders have been liaising with communities. Now we need to hear from the Metropolitan Police Commissioner and the leaders of the Association of Chief Police Officers (Acpo) as to what they will be doing to protect this rise in attacks.”

Mr Murad appealed to the media to act responsibly and not “stoke up” anti-Muslim sentiment, and urged Muslim communities to unite. Read more…