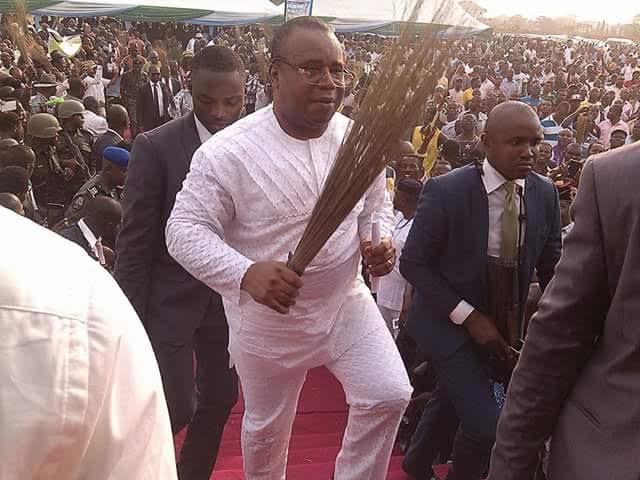 The attempt by the defeated governorship aspirant of the All Progressives Congress (APC) in Akwa Ibom State, Senator James John Akpan Udoedehe to consolidate three separate applications seeking to relist his case which was struck out by Justice E. S. Chukwu met a brick wall today at the Federal High Court, Abuja. Udoedehe is seeking to challenge the conduct of the December 4, 2014 primaries which produced Umana Okon Umana as the APC governorship candidate in Akwa Ibom State.

Udoedehe had brought an application asking the court to relist his case against the conduct of the 2014 APC governorship primary election which was earlier struck out for want of diligent prosecution.

Upon being served with the response filed by Umana Umana and the APC, lawyers to Mr Udoedehe realised that the application to relist was filed several days outside the six days period allowed by law. They then brought another application seeking for extension of time to enable them file the application for relisting. Again, Udoedehe’s lawyers failed to obtain the leave (permission) of the court before seeking for externsion of time as stipulated by law. Surprisingly, when it was time for Udoedehe’s lawyers to file their response to the counter affidavit by Umana Umana and the APC in opposition to the application for relisting, lawyers to Udoedehe again failed to do so within the time allowed by law. A third application seeking to regularise (correct) the errors was equally filed.

When the matter came up in court on Monday, lawyer to Udoedehe, Mahmud Magaji (SAN), sought to consolidate all three separate applications aimed at correcting the many defects in the case and argue them together. This was strongly resisted by Solomon Umoh (SAN) who led other lawyers for Umana Umana and the APC. In its ruling, the court rejected the plea to consolidate the three applications. Mr Magaji eventually argued the applications separately.

In his argument for the relisting of the suit, lawyer to Udoedehe stated that the case was struck out in his absence on the 06/07/15 when the case came up because of misinformation by the court’s Registry and that the court had brought the date slated for hearing of the case forward by two days which led to his absence from court on the day the case was struck out for want of deligent prosecution. He urged the court to relist and revive the case.

However, the presiding judge, Justice Chukwu drew the attention of Udoedehe’s Lawyers to the court’s record which did not support their submission.

In his submission, Solomon Umoh (SAN) contended that the facts upon which Udoedehe’s application for relisting is based were false. He insisted that Udoedehe lied by deposing to facts which were not true just to tarnish the image of the court. He further argued that the applications were baseless and undeserving of attention and urged the court to dismissed same in their entirety.

Meanwhile, an apparently embarrassed Sen Udoedehe who arrived the court late refused to speak with press men who accompanied him to the court after the hearing.

The court has adjourned to February 24, 2016 for a formal ruling on the application to relist.