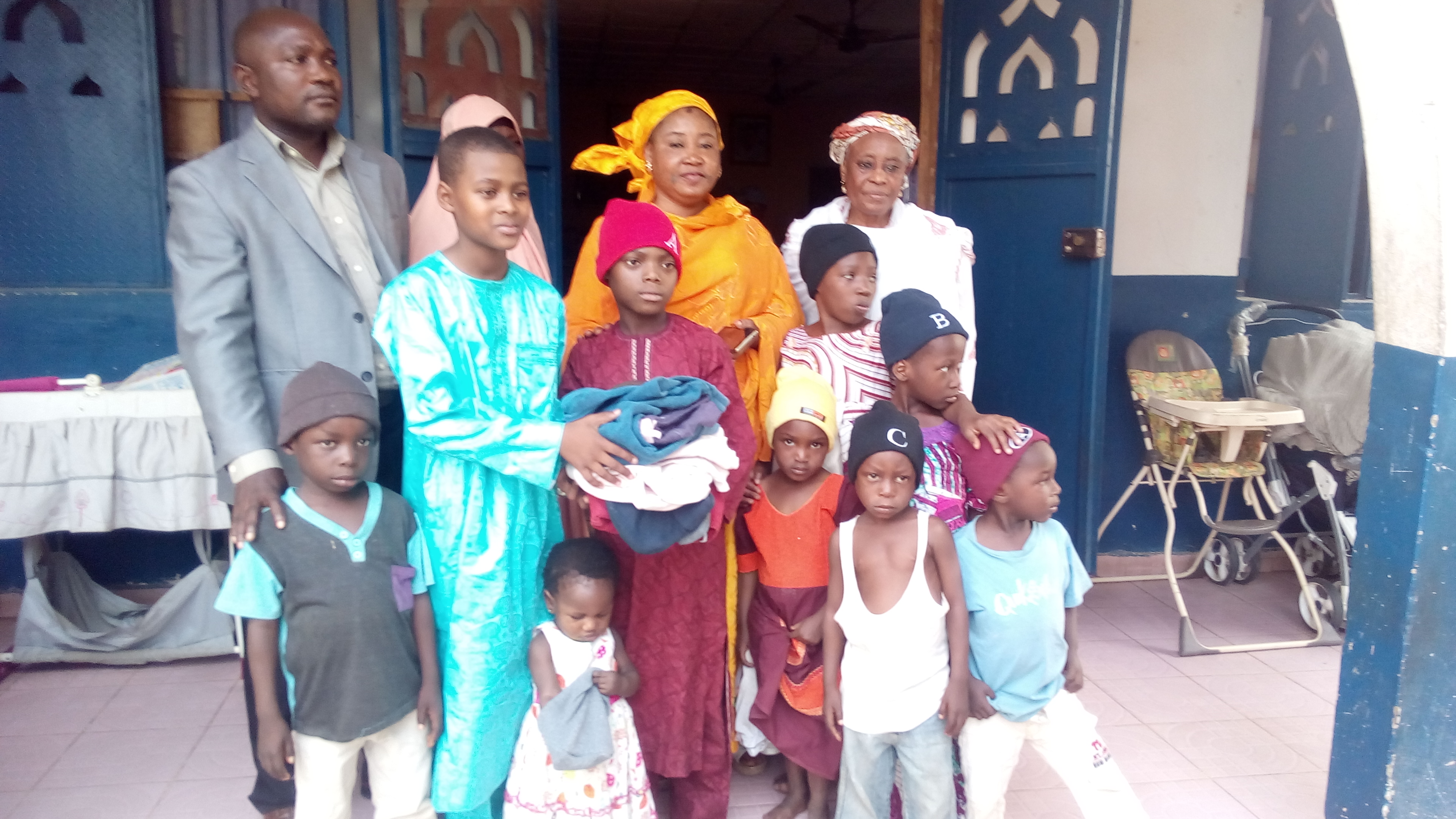 Worried about the serious suffering and the critical situation  most of the destitute children, orphans and  Internally Displaced children at the various Camp across  the north –eastern Nigeria  as a result of  problems related to cold during the Harmattan season for many years.

This makes the 10 years old boy  musician to be saving some part of his school breakfast money with the aims of  buying  cold protective cloths ,so as to  donate them  to the needy in other to celebrate the United nation Universal children’s  day in a special way, and to make them happy like every other child in the world.

Usman Mohammed Gashah who just graduated  from  primary school  in Kaduna told the Team of journalist that accompanied him to some of the orphanage Homes  on a tour visit  in Kaduna state, that he has been saving some part of his breakfast money and other gift from his friends and families for long time, in other to  buy some cloths, so as to donate humanitarian assistance to the needy in the state, including the young boys Almajirais and children living with Albinism.

Usman said,he dint allow his parents to know that he has been  saving some little amount of money in each and every day  his going to school for this purpose of helping  the street children and other motherless kids  that are in-serious need of humanitarian assistance on a period like this.

“Since January this year  I’ve been  gathering  the money, so that it would be plenty, in other to immensely  enables me buys  enough cloths and hash-weather-kits, to help them protect their Body against all forms of cold related diseases during the harmattan.”

“it pains me in each time, I watch the Television and saw how abandoned street children sleeps under the bridge  in the night without parents, and it pains me when ever I saw Internally displaced children suffering in the Camps as a result of Insurgency,and I feel pain to see how destitute children are also suffering in search of food to eat,and also were they sleep is not Good looking.”

According to him,there is no season of the year that does not come without affecting people’s lives either positively or negatively, but the negative effects of harmattan season seem to outweigh its benefits,adding there are many risqué and infection during season.

The guitarist said’I usually find it extremely difficult to sleep with my double eyes close in each time, I remember how those IDPs and Orphans children sleeps on the street while some at the Camp,and I always pray for God to help me,so as to help those children that deserves to be help,they are the children of  Nigerians and they deserved to be treated very well.”

It was observed that During the Tour with his family ,50 Blanket,head warmers,socks,and 50 cardigans were also been seen distributed to various orphanage homes, destitute kids and IDPs from Borno state that are now residing in Kaduna metro-polis.

“Am calling on all child protection networks in Africa,UNICEF,WHO and Religious leaders with Human right organization to rise –up and fight against all forms of violence against children accused of witchcraft, Child Early marriage, Child Trafficking, Child labor, children soldier and bringing an end to little-girls prostitution.”

Responding on behalf of one the beneficiary at Badarawa-kaduna north,Maman Aisha Gamborin Gala,who is a refuges from Borno with 6 children said, she has never tough of a young boy like this  can come and buys a harmattan cloths for her children, that are in a tough situation.

She said,they have no money to feed them serves,not to talk of buying cloth to protect them serves against cold.

Maman  Aisha said,  God will surely bless him for remembering them.

Also responding,Hajiya Maryam Ahmed Tahir,the coordinator of Jamiyyar Matan Arewa kaduna,says “this comes to them like a miracle,because the orphanage has never seen a small boy that comes to donate cloth for the orphans,and it was shocking to see that he is just 10 years old.”

Maryam pointed out that,Allah always bless any one that help an orphans, she pray for God protection to guide him and direct him to the best direction to the lead the country one day.

On arriving at the destitute home at Kano road kaduna town,Usman Gashash also donate some cold protective  cloth to the leaders of the association of person with disability Mallam Abdullahi Sama’ila ,so as to share it to some of the little children in the compound.

Mallam Abdullahi Sama’ila concluded by saying that this is challenge to all the Rich men in Nigeria  who doesn’t have time to remember the less –privilege in the society “The boy surprise us,because his too small,but he thinks very well.