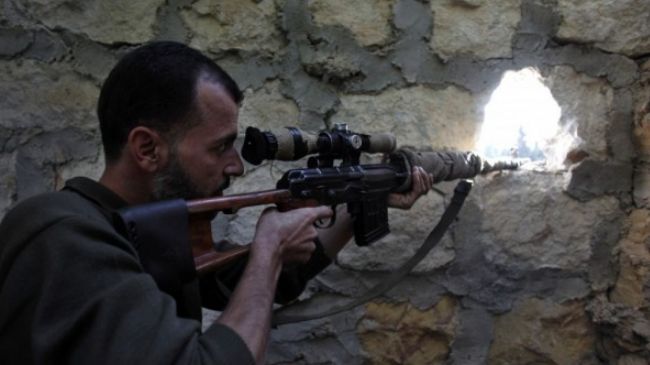 The so-called “Syrian rebels” have taken dozens of UN peacekeepers hostage, demanding the Syrian Army withdraw its troops from its own nation’s territory.

The UN has confirmed that their peacekeepers are indeed being held hostage by what they call “rebels,” and has demanded their release.

Despite this overt, criminal act of terrorism directed at the UN, the West has spun, downplayed, and otherwise ignored the incident, an incident that had the Syrian Army been behind, would have invoked howling indignation, frothing condemnation, and in all likelihood, full-scale military intervention.

Instead, the US Secretary of State John Kerry awarded the terrorists a whopping USD60 million in what he called “non-lethal aid.” The UK’s Foreign Secretary William Hague also pledged support, including sending armor, vehicles and even weapons directly to the hostage-taking terrorists. This substantial and continuous torrent of cash, equipment, and weapons is sent to al-Qaeda terrorists even as both the US and UK sink in unprecedented domestic budget crises.

The West’s Arab collaborators, including Saudi Arabia and Qatar, have led the Arab World in offering these verified al-Qaeda terrorists Syria’s seat in the Arab League. The Arab League has given the green light (officially) to begin directly and openly arming the terrorists, though they have been arming them since at least 2007.

As the West coddles terrorists who are more overtly committing atrocities, both against the Syrian people, along Syria’s peripheries, and even against international observers including the United Nations, they shed the remainder of their legitimacy. In fact, a US State Department, a British Foreign Office, and even a UN who refuses to condemn and entirely break off relations with an organization that takes hostages amidst a myriad of other atrocities documented over the past 2 years, already has absolutely no legitimacy. The people of the West must realize their governments have descended into a dangerous psychosis and has abandoned even a face-value commitment to maintaining a rule of law. A nation not confined by law, or even attempting to pretend to be, is a nation capable of anything, on any scale, at any time. The people of the West now reside in nations far beyond the red line. Now, more than ever, people must begin making hard decisions about their lifestyles and their patronizing of the West’s corporate-financier monopolies. It is not the government or the individuals that constitute it that drive this agenda. It is the corporate-financier interests that create policy think-tanks, that literally write the scripts congressmen, presidents, secretaries and ministers read from – corporate-financier interests we patronize on a daily basis.

While we cannot change the current, perhaps terminal unraveling of Western civilization overnight, we can begin with small but significant steps in rolling back our dependency on corporate-financier monopolies by boycotting them and replacing them. Even a miniscule percentage of change in our lifestyles, month to month will have a profound, collective effect on usurping the unwarranted influence that has granted these insidious interests free reign over the planet and humanity. Decentralizing these monopolies is the ultimate goal, but will take hard work and patience – but it is a goal that most certainly can be achieved, and in many parts of the world it is already being achieved.

If we read the news of hostage-taking terrorists being showered with millions of our tax dollars and being allowed to destroy an entire nation after our own soldiers paid in blood to fight them in a 10 year faux “War on Terror” and are angered, searching desperately for a solution – getting self-sufficient, and decentralizing this war machine, thus returning the reins of power back to the people is that solution. That is real revolution.

The problems in Syria may seem distant, even if absolutely outrageous, but it is a symptom of a sickness our Western governments, amongst us, involved in our daily lives, suffer from. Refusal to treat the illness now, as it ravages Syria, will only allow it to get worse until it inevitably visits upon us the same unhinged hypocritical insanity it is now unleashing on the Syrian people. The fate of the Syrian people is indeed tied directly to our own wealth, prosperity, peace, and well-being. Failing to realize that is folly we shall pay for many generations to come.