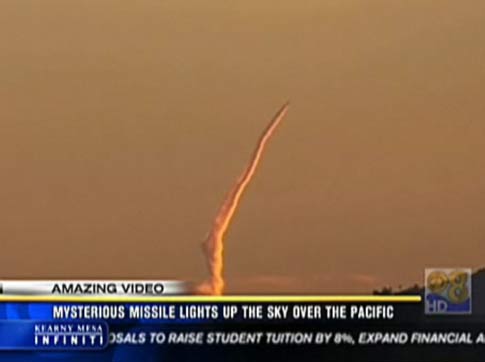 NewsRescue-US officials are scrambling to explain a possible missile launch off the coast of Los Angeles.

A day after a vapour trail was caught on tape the incident remains a mystery, a Pentagon spokesman said on Tuesday.

The apparent missile launch was caught on tape by a KCBS news helicopter on Monday evening.

Video shows a billowing contrail apparently rising from the water about 50km west of Los Angeles and north of Catalina Island. It is not clear whether it comes from land or sea.

“We’re talking to other parts of the US government. We’re doing everything we can to try to figure out if anybody has any knowledge of what this event may have been.”

Robert Ellsworth, a former Nato ambassador and former deputy defence secretary, reviewed the video with KCBS and described the condensation trail as “pretty big” and not likely to be from a Tomahawk cruise missile.

Lapan said it was still not clear what caused the contrail.

“It was clear from the video that there was some type of object traversing the skies that created a contrail,” he said.

“I don’t know that anybody has evaluated it to determine exactly what it was.”

He said the Missile Defence Agency, the North American Aerospace Defence Command (Norad), Northern Command, the Navy and Air Force had all been consulted.

“Sometimes we don’t find these things out in a timely manner. But right now all indications are that it was not DOD involvement in this launch,” Lapan said.

Missile tests are common off Southern California. Launches are conducted from vessels and platforms on an ocean range west of Point Mugu.

Norad issued a statement jointly with the US Northern Command, or Northcom, saying that the contrail was not the result of a foreign military launching a missile. It provided no further details.

“We can confirm that there is no threat to our nation, and from all indications this was not a launch by a foreign military,” the statement said.

“‘Unexplained’ is the best word to use right now until we can gather more information,” Lapan said. source