NewsRescue– The love affair started in Afghanistan. During the 9-year Soviet military campaign to colonize this Muslim Nation, the US in its cold war with the soviets reportedly decided to hinder the soviets from making a strategic win.

It must be stated that Osama Bin Laden was rejected from Saudi Arabia as a “bastard” son. He would later go to Sudan but the Sudanese too rejected him and expelled him in 1998[Guardian], as too insane to be a part of their campaigns. This is the kind of guy the United States saw as the ideal  to utilize to frustrate Russia’s efforts in Afghanistan.

On July 3, 1979, United States President Jimmy Carter signed the first directive for covert financial aid to the opponents of the pro-Soviet regime in Kabul. [Wikipedia1]

National Security Advisor Zbigniew Brzezinski visited Afganistan in 1979 and met with Bin Laden and even took a picture with him. Brzezinski would tell the mujahideen:

We know of their deep belief in God, and we are confident their struggle will succeed. That land over there is yours, you’ll go back to it one day because your fight will prevail, and you’ll have your homes and your mosques back again. Because your cause is right and God is on your side.

The BBC, Canadian Broadcasting Corporation and the Russian journal Demokratizatsiya have all written that the CIA and U.S.A. funded and supported Bin Laden during the Afghan war.

Bin Laden was, though, a product of a monumental miscalculation by western security agencies. Throughout the 80s he was armed by the CIA and funded by the Saudis to wage jihad against the Russian occupation of Afghanistan.

Several other authors, journalists and statesmen have all made the claim that Bin Laden was funded, armed and trained by the CIA to fight off the Russians.

After Ronald Reagan was elected in 1981, U.S. funding of the mujahideen increased significantly and CIA Paramilitary Officers played a big role in training, arming and sometimes even leading mujahideen forces.

The CIA trained the mujahideen in many of the tactics Al Qaeda is known for today, such as car bombs, assassinations and other acts that would be considered terrorism today. [newsone]

According to the BBC documentary video posted below, the name, ‘Al-Qaeda’ was coined by the CIA, to refer to Osama unbeknownst to him, and only in 2001 during a trial of four suspects in the bombings in Africa did the US, in need to incriminate a named group, get an Osama ex associate, Jamal al Fadl [Wikipedia2] to refer to Osama with the Al-Qaeda US code name.

Fast forward to Libya 2011. Gaddafi was a staunch US enemy. In the uprising that hailed from Benghazi, the US and NATO were quick to decide to attack Libya and sack the Libyan Tripoli headed government in favor of its Benghazi opponents.

In doing so, Al-Qaeda would once again come handy. Al-Qaeda militants were recruited from all over, the North Africa AQIM branch and LIFG, Libyan Al-Qaeda.

Obama’s terrorism adviser, John Brennan similarly acknowledged that the US was working with terrorist organizations, precisely, AQIM (Alqaeda In the Maghreb) and LIFG (Libya’s arm of Alqaeda) to depose the Libyan ruler. According to reports, Alqaeda terrorists even were airlifted into Syria by NATO forces.

Shortly after, Libya was categorized as the worlds first official terrorist run nation, as Alqaeda flags were the symbol of the victory of the NTC and these flags were seen even on top of the Libya Benghazi Court house (view Telegraph), as seen in the image below from Daily News and viewable as the first source on Wikipedia’s page on the ‘Alqaeda flag.’

More of this story from Prison Planet 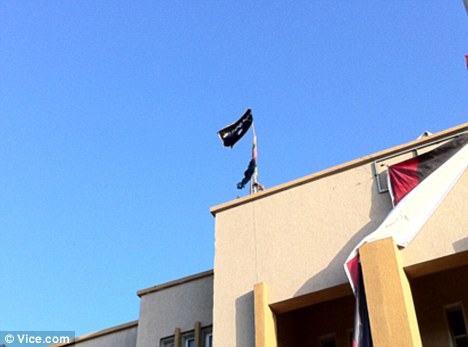 And now in Syria, we see the same pattern all over again. On a February 26th BBC interview, US Secretary of State Hillary Clinton admitted that Alqaeda, Hamas and other global US-labeled terrorist organizations were on the same side as USA official policy, supporting the opposition in Syria.

Clinton said, “We have a very dangerous set of actors in the region, Al-Qaeda, Hamas, and those who are on our terrorist list, to be sure, supporting – claiming to support the opposition [in Syria].” (watch BBC video)

In our publication earlier today, we relayed an Asia times article describing the establishment of Al-Qaeda in Syria, as the heart of the rebellion:

There has recently been a small stir in the American media, as media organizations from the New York Times to the Wall Street Journal to the Associated Press have finally gotten around to acknowledging a “presence” of al-Qaeda and like-minded jihadist groups among the Syrian rebel forces seeking to topple the regime of Bashar al-Assad.

It is difficult to see what the cause of the excitement is. After all, such a presence has been blindingly obvious for many months: whether as a result of the dozens of suicide attacks that have plagued Syria or the numerous videos that have emerged showing rebel forces or supporters proudly displaying the distinctive black flag of al-Qaeda.

You can add anywhere fit in that tale, that Osama was supposedly killed the night of a great wedding in England that Obama wasn’t invited for, and his body thrown to the sharks, though there is no witness or other evidence of that and his body, well, unless the sharks decide to give us the autopsy results…

So the question to be asked is- what is Al-Qaeda?

For the numerous Muslims who were hindered, stoned and discriminated against boarding flights or moving around towns, for the past several years due to the stain of “Al-Qaeda”, whom some fora now nickname “ALL CIA duuh”, the realization of what Al-Qaeda actually is, probably causes a lot of pain.
What about the global resource that was put into pursuing Al-Qaeda. The US Homeland security department that was created in pursuit of Al-Qaeda, was the US’ single largest investment since Eisenhower’s time.
Research into a cure for AIDS was delayed, a cure for malaria likewise due to the investments into the pursuit of Alqaeda in the last 12 years.
The world would basically have been a different place had we all known they were “allies”.
—