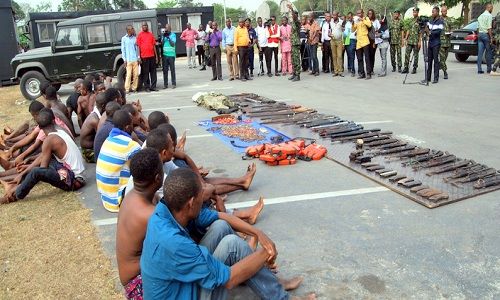 On Reaching The House Of Solomon Ndigbara, Who Had Been Declared Wanted By The Army, Some Hoodlums Fired At The Commanding Officer ~Army

The Nigerian Army on Tuesday explained that its operation in Yeghe community of Rivers State was largely aimed at flushing out ex-militant leader, Solomon Ndigbara.

It would be recalled that there was heightened tension in the community following a prolonged exchange of gunfire between suspected militants guarding the residence of the ex-militant leader and soldiers on Monday.

But addressing newsmen in Port Harcourt, the State capital yesterday, the Commander of the 2 Brigade of the Nigerian Army, Port Harcourt, Brig.-Gen. Stevenson Olabanji, said there was no loss of life during the encounter.

“Around 12 noon on Monday, we received reports of gun fire in Yeghe community, Gokana Local Government Area and I immediately dispatched my Commanding Officer to investigate the incident.

“On reaching the house of Solomon Ndigbara, who had been declared wanted by the army for gun running, some hoodlums fired at the commanding officer.
“

The attack on the commanding officer led to a gun battle between our forces and hoodlums which resulted in them (hoodlums) being chased out from the community.

“We learnt that the hoodlums, who fled Yeghe community, later went to Bori community in Khana Local Government Area and burnt down a campaign office belonging to APC”, he said.

Mr. Olabanji said the command had assessed the situation in Bori and was currently “conducting a stabilisation operation with focus on arresting criminals who committed that heinous crime”.

“No soldier was killed or sustained gunshot injury nor was there anybody (civilian) killed during the operation”, he said.

Mr. Olabanji also denied accusations that the army was being used by some powerful individuals and groups to influence political interest in the state.

The accusation, he said, was propaganda as no personnel in the brigade would be involved in such activities.

Mr. Olabanji also paraded seven suspected cultists accused of masterminding the killings of civilians a fortnight ago in Omoku community in Onelga Local Government Area of the state.
He said the vehicle used by the suspected cultists had been recovered, adding that they had provided useful information to aid further investigation.

The army commander further said that his officers recovered arms and ammunition during a two- month mop-up operation in the state.

“Several suspects were also arrested during the period and handed over to other security agencies for further investigation and prosecution”, he said.

He gave assurance that the state would no longer be a safe haven for criminals as the brigade would hunt down perpetrators of crime.

Mr. Olabanji, however, called on members of the public to provide information to security agencies that would lead to the arrest of criminals, adding that their identity would be treated with utmost confidentiality. informationng.