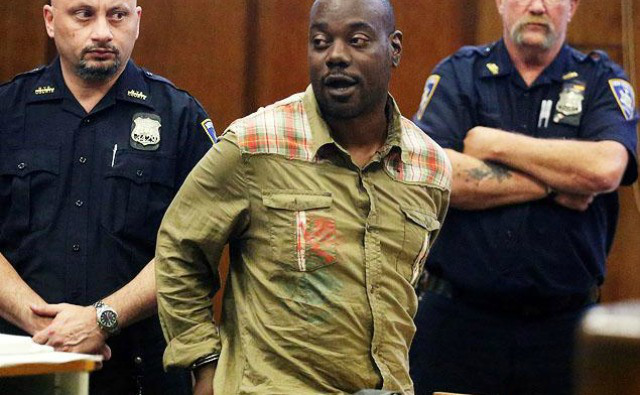 Lashawn Marten (pictured above), a suspect charged with punching Jeffrey Babbitt (pictured below) in Union Square after yelling he was going to attack the first White man he saw, was charged with manslaughter as a hate crime Tuesday, reports the New York Daily News.

Marten, who is African American, was reportedly walking through Union Square September 4th when he allegedly punched Babbitt. The 62-year-old fell to the ground and sustained a head injury.

He would later die at a hospital.

Babbitt, who was White, was the sole caretaker of his 94-year-old mother; he lived with the retired conductor in his Brooklyn apartment.

At the time of the arrest, Marten also reportedly threatened responding officers, saying, ”Next White guy in uniform is going to be next. You’re next too. It is a bulls**t assault three. I’ll be out in thirty days.”

Marten also claimed Babbitt insulted his mother, “He said something about my momma, and I punched him.…You spelled my name wrong,” Marten reportedly told the cops.

The presiding judge also ordered Marten to undergo a psychiatric exam at the Tuesday appearance. Michael Croce, Marten’s attorney, seemed to agree with this decision.

“There’s definitely a reason to think he needs to be evaluated,” Croce said. ”I think the evidence will be lacking to show his intent to cause a serious physical injury,”

In that same interview, he also questioned if Babbit had really died.

“Where’s the autopsy report? Where’s the death certificate?”  he asked. Marten seemed unafraid of the impending charges at the time, admitting to an earlier, somewhat similar, incident from 1997.

“You think I’m afraid of these charges? I punched a police officer in Newburgh in front of a crowd of people and all his colleagues and I was out of jail in 168 hours.”

Marten is charged with manslaughter in the first-and-second degrees, assault, and attempted assault as hate crimes. He faces at least 25 years to life.