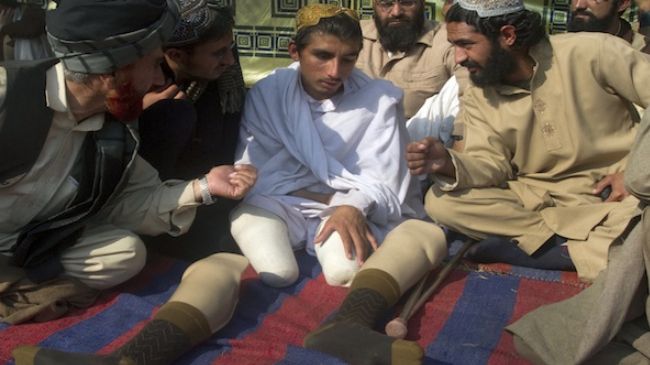 Tribesmen sit with Sadaullah Khan, a man from Pakistan’s North Waziristan tribal region, who says he lost both legs and one eye in a 2009 US drone strike on his house.

Even as Americans grieve over the Boston Marathon bombings, they should know that US assassination drone strikes worldwide kill many more people weekly and continue unpunished, an analyst says.

“While we mourn the horrific events in Boston, we must remember that our government perpetrates a Boston bombing weekly in Pakistan, Yemen and Afghanistan,” political commentator Sean McElwee says.

He adds that although the White House administration alleges that it prefers trials for the rule of law, the true reason for its targeted killing program across the globe is that: it’s cleaner, simpler and less embarrassing to just off the suspected terrorists. The government uses mafia logic – why waste time and energy risking the rule of law when you can just swoop in and launch a smart bomb?

On April 15, the twin bombings near the finish line of the Boston Marathon killed three people and injured more than 170.

At least five people were killed and seven others injured on April 17 in an attack by a US terror drone in northwestern Pakistan’s tribal region. The drone strike took place in South Waziristan’s Babar Ghar area.

Local officials said the US drones fired two missiles at a house in South Waziristan, and that the house was completely destroyed in the attack.

On April 14, four people were killed by a US terror drone in the Datta Khel area, located some 35 kilometers (22 miles) west of Miranshah, in North Waziristan.

Pakistan’s tribal regions are attacked by US assassination drones almost regularly, with Washington claiming that militants are the targets. However, casualty figures clearly indicate that civilians are the main victims.

In addition, two people were killed and three others injured in a US assassination drone strike in eastern Yemen early on April 22.

On April 17, at least five people were killed in two separate strikes carried out by US terror drones near the Yemeni capital, Sana’a.

Four of the victims were killed in the first strike as they were riding a vehicle in the desert area of Oussab al-Ali, situated about 140 kilometers (90 miles) south of Sana’a, said a Yemeni official.

The fifth victim, who was identified as Hamed Radman, was killed after a drone bombed his house.

The United States has launched numerous drone attacks in Yemen that have killed many innocent civilians over the past few years.

Washington claims that its airstrikes target militants, but local sources say civilians have been the main victims of the non-UN-sanctioned airstrikes.

Yemenis have held many demonstrations to condemn the United States’ violations of their national sovereignty. -PressTV