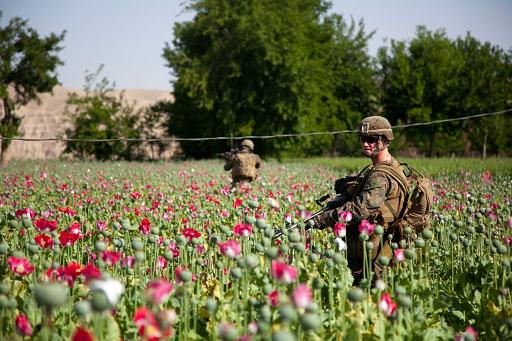 ast Africa is becoming a major transit point for heroin from Afghanistan, especially for shipments to Europe.

Most of it still takes an established path known as the “Balkan route” through Iran and southeast Europe, Reuters reports. Recent seizures along the Kenyan and Tanzanian coastlines, however, point to a “southern route.”

Between 2002 and 2011, Africa was sporadically identified as an origin for heroin reaching Europe. In 2012, however, East Africa became a prominent spot, according to the UN.

Afghanistan is the source of 80% of the world’s illicit opium products, according to The United Nations’ 2014 World Drug Report.

Afghan opium cultivation has increased by 7% from 2013 to 2014 and production increased as much as 17% over the same period, the UN reported in November. “Authorities “are worried that a record opium harvest in Afghanistan will flood global heroin markets this year,” Reuters also notes. The US Drug and Enforcement Agency has spent years chasing after one organization, known as “Akasha,” responsible for the production and distribution of huge amounts of narcotics in Africa, according to Reuters.

Adding to the global nature of the problem, opiates and opioids, like heroin, top the list of drugs that cause the most disease and drug-related deaths, according to the UN.