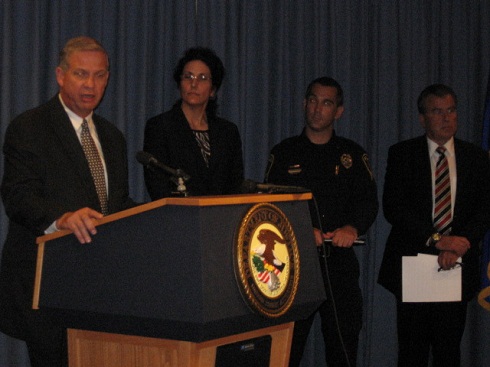 MINNEAPOLIS — A federal judge on Monday sentenced two men to decades in prison for their roles in a $50 million bank fraud conspiracy that authorities say spanned six states and depended on employees of some of America’s largest banks stealing customers’ identities.

Earlier in the day, Davis sentenced Olugbenga Temidayo Adeniran, 36, of New York, described as a high-level manager in the conspiracy, to 22 years in prison.

A federal jury in Minnesota convicted Okeayaninneh and Adeniran in February on multiple counts, including bank fraud conspiracy and aggravated identity theft.

So far, 27 people have either pleaded guilty or been convicted in the scheme, in which customer identities were stolen, then bought and sold, and used to create phony bank and credit card accounts, apply for loans or get cash. Prosecutors say the conspiracy was carried out from 2006 through 2011 in Minnesota, Arizona, California, Massachusetts, New York and Texas.

Authorities said the scheme victimized more than 500 people around the world by stealing their personal and financial information. The Minnesota Financial Crimes Task Force led the investigation, dubbed Operation Starburst, which brought together investigators from local, state and federal agencies.

“Today’s sentences send a clear message to those identity thieves and fraudsters who conspire with dishonest bank employees to wreak havoc on the personal finances of innocent customers,” U.S. Attorney for Minnesota B. Todd Jones said in a statement.

In the statement, Louis Stephens, special agent in charge of the U.S. Secret Service in Minnesota, described the operation as “a complex criminal conspiracy with an organizational hierarchy and effectiveness much like traditional organized crime.”

Convicted identity thief Julian Okeayaninneh has received a 27 year prison sentence for orchestrating a massive ID fraud ring which operated in nearly a dozen states and whose victims were from across the globe. Okeayaninneh’s conviction follows a multi-year investigation by the BCA’s Minnesota Financial Crimes Task Force. Dozens of other participants in this conspiracy have already been sentenced.

Learn more about the case: https://dps.mn.gov/divisions/bca/Documents/081312.Okeayaninneh,%20etc.%20sentenced.pdf