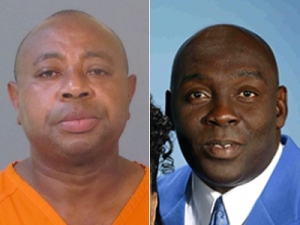 (CNN) — A sheriff says he’s closer to finding the motive behind the fatal shooting of a Louisiana pastor who witnesses say was killed by a former deacon as the horrified congregation looked on.

In the complaint, the woman said Harris had raped her several months ago, according to Mancuso.

He declined to release the report, saying it was part of the murder investigation against former church deacon Woodrow Karey. Mancuso said he had not determined whether a rape had occurred.

Witnesses told police that Karey walked into the Tabernacle of Praise Worship Center around 8:20 p.m. Friday and shot Harris twice — the first time as Karey entered the church and then again at close range after Harris had fallen to the floor.

Deputies arrested Karey after he called 911 and told the dispatcher what he had done. He is charged with second-degree murder.

Karey told authorities that a week earlier he’d found text messages from his wife to the pastor. He believed, Mancuso said, that they were having sex and he confronted his wife. Days after the confrontation, Karey’s wife filed the police report accusing the pastor of rape, Mancuso said.

Authorities had not yet investigated the rape accusation by Karey’s wife. Read more…