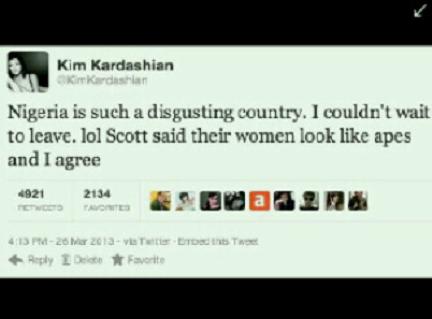 “Nigeria is such a disgusting country. I couldn’t wait to leave. lol Scott said their women look like apes, and I agree.”

Kim was invited to Nigeria and supposedly paid $500,000 by a Nigerian publicity freak, Darey Art Alade for a valentine show.

The US based actress spent barely 20 minutes at the event before jetting back to the United States via the next available Air France flight. Dare has come under tremendous abuse from Nigerians on social media for inviting the pregnant publicity hound, Kim to Nigeria.

NewsRescue can not verify the authenticity of the tweet image*

The tweet does not appear on her timeline at present and may be Photoshopped, but Nigerian tweeters are abuzz with the story, regardless of its authenticity. It’s apparently not what they would not expect.

A nasty tweet about the country, allegedly from the reality star’s account, made its rounds on the Internet on Tuesday, sparking outrage in the Twittersphere.

The post read, “Nigeria is such a disgusting country. I couldn’t wait to leave. lol Scott said their women look like apes and I agree.”

However, Gossip Cop immediately noticed something was amiss in the purported tweet, as the blue “verified” check mark was absent from the right side of her name.

So we checked in with a rep for Kardashian, who confirmed our suspicions that the tweet was indeed a FAKE.

The spokesperson tells us, “This wasn’t tweeted from her account. She never tweeted this.”

Kardashian visited Nigeria in February to host a a concert with R&B singer Darey Art Alade. 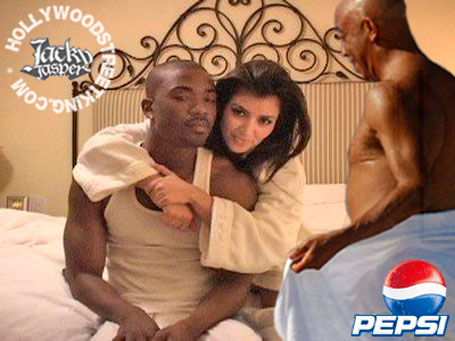