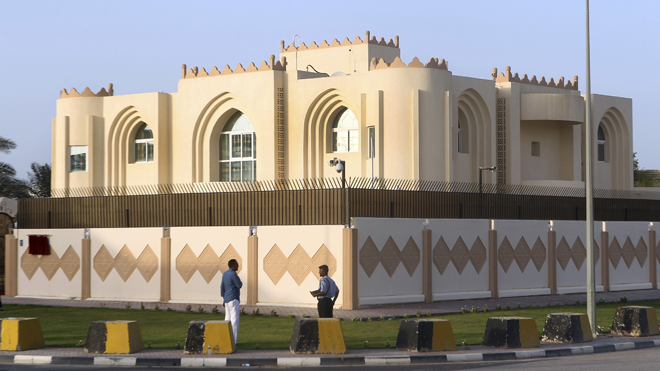 NewsRescue- It is the story of Hamas. The US and Israel are said to have created Hamas to counter the strong and out of their control, Yasser Arafat’s PLO. It is the story of al Qaeda. The CIA is said to have created al Qaeda to control and frustrate their “enemy,” the U.S.S.R, during the cold war. It’s the story of almost all African nations, tribalism is created and power is given to a certain section, on section bases to create contest and strife that enables Europe stay relevant and in virtually power.

The same story is repeating itself today with Afghanistan. Obama recently announced the “Bush war on terror,” over. Apparently, what he meant was, now the terrorists are back in the US’ employ and there is no war between them any more. US and NATO is arming al Qaeda in Syria, in the same pattern described above. And now, in what can only be described as complete madness, the Taliban have opened their “embassy,” in Doha, Qatar. This, against the will of the Afghanistan government and people. Qatar, the capital of terror-linked Al Jazeera, the worst nation in the Middle East in combating terror and a nation ruled by a royal family linked to al Qaeda, Boko Haram in Africa and other terror operations, is not a surprising host for such Taliban headquarters.

The story from BBC:

A row over the status of the Taliban’s Doha office shows no sign of abating as the militant group continues to display its flag, despite Afghan protests.

A BBC correspondent in the Qatari capital says the flag still flies, albeit on a shorter flagpole.

Last night US Secretary of State John Kerry told President Hamid Karzai the flag and nameplate would be removed.

Afghan officials rejected such moves as insufficient and voiced anger at Taliban claims about the office.

“It is a kind of Taliban establishment which we don’t want,” Muhammad Ismael Qasemyar, a member of Afghanistan’s High Peace Council, told the BBC.

Mr Qasemyar said negotiators objected to the statement made by the Taliban when the office was established, which had indicated the office would be used to represent the Taliban to the outside world.

He said that was against a previous agreement that it would only be used as a location for peace talks.

“Unless our demands are accepted, we are not going to take part in Qatar talks,” he added.

Correspondents say that the Qatar office, which was opened on Tuesday, means the Taliban are no longer only a fighting group, but have a political arm too.. read more