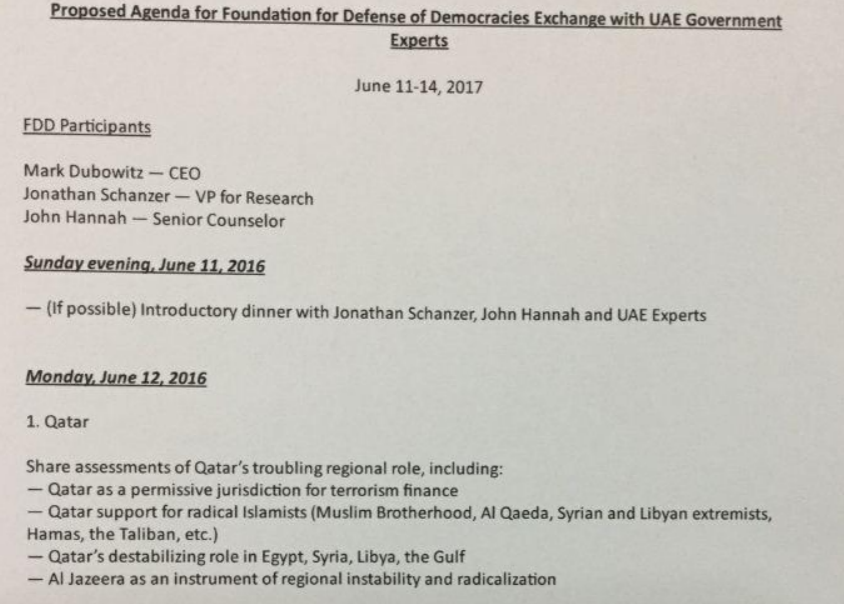 The Trump administration this week appeared to take a potential step closer to backing efforts plotted by Saudi Arabia and the UAE to destabilize Iran; possibly topple its Islamic government; and force Qatar to fall into line with Gulf policies that target Iran, political Islam, and militants; with the appointment of a seasoned covert operations officer as head of the Central Intelligence Agency’s Iran operations.

The appointment of Michael D’Andrea, a hard-charging, chain-smoking operative, alternatively nicknamed the Dark Prince or Ayatollah Mike, whose track record includes overseeing the hunt for Osama Bin Laden, suggested that the CIA was likely to take a more operational approach in confronting Iran in line with President Donald J. Trump’s Saudi and UAE-backed hard line towards the Islamic republic, which involves a possible push for regime change.

Mr. D’Andrea took up his new post at a moment that the US focus appeared to be shifting to Iran as the Islamic State suffered significant defeats with the near fall of Mosul in Iraq and the imminent fall of Raqqa, the group’s self-declared capital in Syria.

Saudi support of militant groups in Pakistani Balochistan that operate across the border in the Iranian province of Sistan and Balochistan is abetted by a US policy that allows militancy to fester by failing to recognize links between multiple conflicts in South and Central Asia.

Balochistan serves as a safe haven for the Afghan Taliban and as a transit station in the smuggling of drugs from Afghanistan to Iran and beyond. It is also the focal point of at least two regional proxy wars: the escalating rivalry between Saudi Arabia and Iran and the perennial dispute between Pakistan and India. Pakistan accuses Indian intelligence of supporting Baloch separatists in retaliation for Islamabad’s backing of militants in Kashmir.

Mohammad Baksh Sajdi, the assistant commissioner of the Baloch district of Kharran, in a demonstration of the influence of Saudi-inspired, anti-Shiite, anti-Iranian Sunni Muslim ultra-conservatism, recently banned barbers from “cutting beards in a fashionable way which is against the principles of Islam according to all religious scholars.” A similar edict was issued in Balochistan’s Omara district. A magistrate in Kharran re-imposed the ban after it was cancelled by the government because it was illegal.

Mr. D’Andrea, who converted to Islam to marry his Muslim wife rather than out of religious conviction, brings an impressive covert operations record to challenging Iran. Mr. D’Andrea was reportedly involved in the use of torture in interrogations of suspected militants under President George W. Bush.

He also played a key role in the targeting in 2008 of Imad Mugniyah, the international operations chief for Lebanese Shiite militia Hezbollah who maintained close ties to Iran. Mr. Mugniyah was assassinated in Damascus in an operation carried out together with Israel’s intelligence agency, Mossad. Mr. D’Andrea was also involved in the ramping up of US drone strikes in Pakistan and Yemen that target Islamist militants.

The New York Times noted that Mr. D’Andrea’s appointment came as some US officials, including Ezra Cohen-Watnick, the National Security Council’s senior director for intelligence, were pushing for a US policy of regime change in Iran.

Mike Pompeo, an advocate in the past of military action against Iranian nuclear facilities, wrote last summer before his appointment by Mr. Trump as CIA director that “Congress must act to change Iranian behaviour, and, ultimately, the Iranian regime.”

Mr. D’Andrea’s appointment stroked with an emerging Saudi strategy to escalate the kingdom’s proxy war with Iran by fomenting unrest among the Islamic republic’s ethnic minorities as well as to confront together with the United States Iranian-backed groups in Syria and Yemen. The Trump administration has already stepped up support for Saudi Arabia’s two-year old, ill-fated intervention in Yemen.

Iran is unlikely to stand by idly if Saudi Arabia and the US were to initiate covert operations against it. “There’s just one small problem: Iran is unlikely to back down,” said US Naval Postgraduate School Iran expert Afshon Ostovar. Mr. Ostovar noted that Iran’s ability to operate through proxy groups like Hezbollah, Lebanon’s Shiite militia, Palestine’s Islamic Jihad, and militias in Iraq was “its most strategic asset.”

As a result, the US-Saudi-UAE strategy risks Iran retaliating by attempting to stir trouble among Shiites in Bahrain, home to a low-level insurgency since the island’s Sunni Muslim minority regime brutally squashed a popular uprising in 2011 with the support of Saudi troops, and in Saudi Arabia’s oil-rich, predominantly Shiite Eastern province.

To be sure, Shiites in Bahrain and Saudi Arabia are Bahrainis and Saudis first and Shiites second. But decades of discriminatory policies in both regions have left their toll, and offer Iran potential opportunity to stir the pot.

Saudi Arabia’s Okaz newspaper reported this week that authorities had foiled an attack on US forces based in Qatar. The newspaper said the foiled attempt was planned by an Al Qaeda unit headed by a Qatari national.

Okaz’s report came in the wake of a suicide bombing in Qatif in the Eastern Province and a Saudi and UAE-sponsored media campaign against Qatar because of its ties to Iran and alleged support for militants. Saudi Shiite activists accused a US-trained Saudi interior ministry unit of having instigated the Qatif bombing in an effort to bolster the kingdom’s claim that it is a victim of Iran-inspired political violence.

Qatar announced amid the Saudi-UAE campaign that six of its soldiers had been wounded in Yemen “while conducting their duties within the Qatari contingent defending the southern borders of the Kingdom of Saudi Arabia”.

In a move reminiscent of past Qatari efforts to placate UAE and Saudi criticism, Qatar was reported to have expelled several officials of Hamas, the Islamist group that controls the Gaza Strip, who were involved in the group’s activities on the Israeli occupied West Bank.

In the latest episode of the Gulf cyberwar, leaked mails from the email account of the UAE ambassador in Washington, Yousef Al Otaiba, whose authenticity was confirmed by Huffpost and The Intercept, showed the UAE looking at ways to influence Iran’s domestic situation.

The UAE was also pressing the Trump administration in cooperation with the Washington-based Foundation for Defense of Democracies to move its US air force base, the largest in the Middle East, out of Qatar.

The emails also revealed efforts to persuade US companies not to pursue opportunities in Iran. Various media reports suggested that Saudi Arabia and the UAE were gunning for the removal of Sheikh Tamim bin Hamad Al-Thani as emir of Qatar.

A proposed agenda for a meeting this week between senior UAE officials and Foundation executives included discussion of possible US and UAE “policies to positively impact Iranian internal situation”. Among the list of policies were “political, economic, military, intelligence, and cyber tools,” and efforts “contain and defeat Iranian aggression.” The agenda also included countering Qatari support for Islamist and militant groups; its “destabilizing role in Egypt, Syria, Libya, the Gulf;” and “Al Jazeera as an instrument of regional instability.”

The Foundation, which has played a leading role in arguing against the 2015 agreement that ended the Iranian nuclear crisis and lifted crippling international sanctions against the Islamic republic, enjoys funding from wealthy US conservatives, including gambling mogul Sheldon Adelson, who supported Mr. Trump’s election campaign and is a close associate of Israeli Prime Minister Benyamin Netanyahu.

The Saudis backed by the US are likely to be fishing in murky ponds in Iran. Baloch groups are largely delineated along either nationalist or Sunni Muslim ultra-conservative lines with Pakistani intelligence backing religious groups against the nationalists.

However, communities like the Iranian Arabs in Khuzestan, Iran’s oil-rich province that Arabs call Ahwaz after the region’s main city, are deeply divided and factitious and often a cesspool of personal, political and ideological rivalries. Various of the Ahwazi and Baloch groups maintain links with one another. Yet, sorting out who is who is often an almost impossible task.

In an assertion of ethnic identity, thousands of Iranian Arabs attended in March 2017 an Asian soccer competition match between Esteghlal Ahvaz FC, the local team in the Khuzestan capital of Ahwaz, and Qatar’s Lekhwiya SC dressed in traditional Arab garb.

Ahwaz Monitor, an Iranian Arab website, said the fans were protesting government efforts to suppress their identity. It said the fans cheered their team in Arabic rather than Farsi and chanted “Arabic is my identity and honour” and “Al Ahwaz for Ahwazis and all Gulf state residents are dearest to us.” Fans also reportedly recited poetry celebrating their region’s Arab heritage.

The website created last summer by Iranian Arab activists is emblematic of the factitiousness of exile Iranian ethnic minority groups. Yasser Abadi, an Ahwazi activist, who founded the website, rejected allegations that it was Saudi-backed or had links to militant Saudi-backed groups like Jundullah in Balochistan or the Arab Struggle Movement for the Liberation of Al-Ahwaz (Harakat Al-Nizal L’Tahrir al-Ahwaz) that has claimed responsibility for a series of attacks in Khuzestan.

Al Nizal is believed to have close ties to Sunni Muslim ultra-conservatives in Saudi Arabia and Kuwait as well as the Syrian Muslim Brotherhood. The group’s spokesmen appear on Wesal TV, a Saudi-based, virulently anti-Shiite satellite broadcaster.

Mr. Abadi insisted that he had funded the site himself, paying GBP 350 for three years of Internet hosting. The site “doesn’t need Saudi or Arab League support or encouragement,” Mr. Abadi said.

Mr. Abadi described Saudi policy towards Khuzestan as “volatile’ and geared towards “militarizing the region.” Mr. Abadi said most Ahwazis rejected violence because of the death and destruction they see elsewhere in the Middle East. He said his group relied on “Arab influence,” which he defined as indirect “media support, Arab votes in UN sub-committees against Iranian practices…publications, and legal support.”

Iran watchers noted that Iranian President Hassan Rouhani has allowed some voice of dissent to be heard. “The more that this happens, the less the Saudi-backed separatists win. What the separatists want is the polarisation of views and to incite the regime to attack the (Iranian Arab) community, thereby securing a popular backlash. In recent weeks, they have conducted more murders, mostly of security personnel but also of non-security officials. They want mass arrests and public executions in order to establish themselves as the vanguard of the Ahwazi resistance,” one expert said.