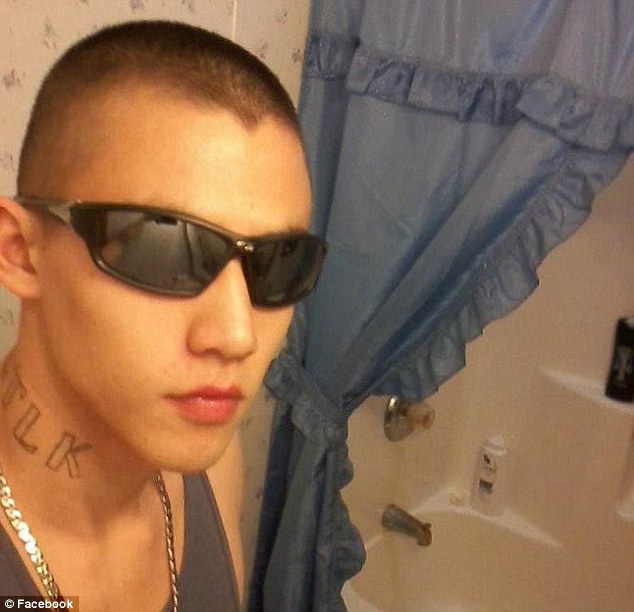 A teenager who allegedly kidnapped a woman and held her as a sex slave for more than two weeks called an FBI agent daily to tell him he was involved in sex trafficking, it has emerged.

It is not clear what action – if any – the FBI took after receiving the phone calls. Calls to the FBI from MailOnline were not returned and the agency declined to comment toABC beyond the affidavit.

The woman, who had been kidnapped from California and forced to travel to Todd’s home in Naples, New York, only escaped when she faked an asthma attack and went to hospital.

After her escape, she traveled to Florida with her boyfriend and Todd called the FBI agent again, identifying the woman and saying he wanted help in tracking her down as he had feelings for her.

The bizarre scenario was outlined in an affidavit filed in a federal court on July 9 by Agent Crouch.

Todd was arrested on July 10 and charged with kidnapping across state lines, which has a maximum sentence of life imprisonment. The involvement of two states could go some way to explain how agents did not know the woman was missing.

Todd met the woman on a bus from Florida to San Diego, where she was traveling to see her mother and look for a job. Todd sat next to her and would not leave her alone, the documents state.

‘Plot’: He met her on a bus to California before forcing her to go with him to New York by saying he was in a gang and would kill her family. At his home, he allegedly raped her several times a day

He suggested they get a hotel together in San Diego and the victim said that, although she did not want to, she agreed and planned to call someone for a ride when they got there.

But as they neared the hotel, Todd said he was part of a gang and they would track her down if they fled. He drove her to a Wal-Mart, where he bought a machete, knife and a change of clothes for her.

Once back in the hotel, he raped her with the machete on the bed beside them, she said.

Two days later, they boarded for another bus for Rochester, New York, with Todd saying he would kill her parents if she did not go with him, she told the FBI. Calls: FBI Agent Barry Crouch received the calls but it is not known what action – if any – he took

A man who was identified to her as Todd’s grandfather collected them from the bus station and took them to Todd’s grandparents’ home, where he lived.

Throughout the journey, the older man would not look the victim in the eye, did not engage her ‘and did not seem to care that she was there’, according to the affidavit.

When the woman failed to appear in San Diego, her mother filed a missing person’s report.

For more than two weeks, the woman was allegedly held captive in Todd’s room and raped several times a day. He also allegedly beat her with his belt and stomped on her wearing heavy boots.

When she went to the bathroom, he would watch her before taking her back to his room, and he only allowed her to sleep for four hours a day with just a towel for a cover.

Throughout the ordeal, he told her that he was working with the FBI and that she was too, and that if she spoke to anyone else, they would arrest her.

Special Agent Couch said in late April or early May he received a phone call from Todd, who said he wanted to pass on information about a human sex trafficking ring.

‘Todd stated that the reason he was calling the FBI was that he had recruited a certain woman, started to have personal feelings for her, and decided he did not want her involved with the trafficking,’ Crouch wrote. Scene: The teen took the woman to his grandparents’ home, pictured, and they did not ask questions

He called back daily for two weeks, speaking to Crouch and two other agents. He also said he had information about a missing person, but did not name her.

At one point, he took the woman to the Naples library for a drug deal and she realized where she was, and contacted her boyfriend on one of the computers to alert him.

They plotted for her to fake an asthma attack days later and on May 12, Todd drove her to the hospital, where she was able to contact her boyfriend to collect her.

According to hospital records, at one point the woman begged: ‘Please don’t make me leave; he is dangerous and I have been trapped in his house for the last three weeks.’ Escape: She pretended to have an asthma attack so Todd took her from the home, pictured, to hospital

He took her back to Florida. She was initially unwilling to tell state troopers or hospital staff about her ordeal as she believed Todd’s story that she would be arrested if she said anything, she told Crouch.

After she escaped, Todd called Crouch again ‘hoping the FBI would assist him in locating the woman,’ Crouch said in the affidavit.

He named her and was also connected to her disappearance through witness testimony at the bus stations, the affidavit said.

He was arrested and faces a charge of interstate kidnapping. His next court appearance falls on August 6 in Rochester, New York.