The Nigeria Customs Service (NCS) has intercepted 470 pump action rifles imported from Turkey at the Tin-Can Island port in Lagos.

The Comptroller-General of NCS, Hameed Ali, told journalists in Lagos on Thursday that the seizure was the fourth at the Lagos port within eight months.

“Customs decided to follow profiling approach of 100 per cent examination on containers, especially those from Turkey. 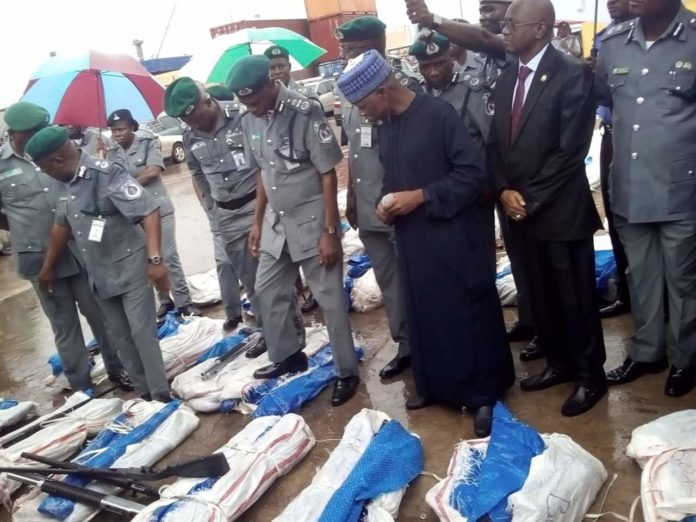 “The terminal operator was consequently directed to quarantine the container for analysis.

“The container was later transferred to Enforcement Unit of the command where 100 per cent examination revealed it contained 470 pump action rifles.”

According to him, the importer of the cargo is Great Oil and Gas Ltd and the vessel named “MV Arkas Africa” owned by Hull Blyth.

He added that NCS was capable of meeting the challenges being posed by smugglers and urged Nigerians to “remain vigilant to deal with enemies of the country.”

The comptroller-general assured Nigerians that Customs officers were now on alert, following the directive he issued to customs area controllers on Wednesday.

He said the management of NCS had implemented a policy of rewarding good deeds and punishment for those who compromised.

He announced that he would meet with the ambassador of Turkey to discuss the continuous importation of containers of ammunition into Nigeria.

He said Customs would continue to subject all containers to 100 per cent examination “to safeguard lives of citizens.

“Customs has to go beyond examination because none of the importers has come to pay duties on those vehicles intercepted in August.

“Some of the vehicles are customised. What we are after is to collect duties on any vehicle coming into the country.

“Section 147 of Customs & Excise Management Act (CEMA) gives right to Customs to enter any premises even without search warrant.

“Also, Section 158 of CEMA gives Customs the right to stop and search at any time.”

He, however, noted that since the container belonged to same importer of 1,100 rifles intercepted on September 11, investigation was ongoing to fish out those connected with it.