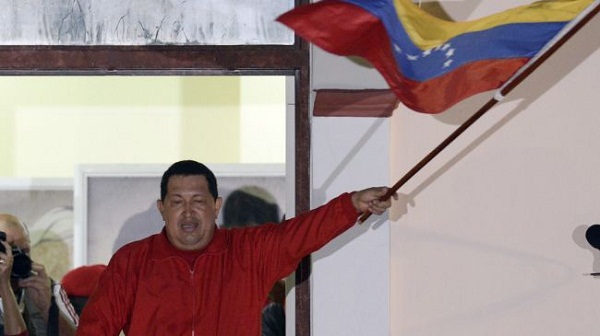 President Hugo Chavez has comfortably won a fourth consecutive term in office after a hotly-contested presidential election in Venezuela and a fierce anti-Chavez campaign in Western media. Chavez is a fierce critic of US policies.

Thousands of jubilant supporters of the president poured into the streets across the capital city of Caracas to celebrate the victory, right after the president of the Electoral National Council, Tibisay Lucena, announced the results.

With 95.05% of records processed, Chavez obtained 7,963,061 votes, equivalent to 55.05%. The right-wing candidate Henrique Capriles received 6,426,286 votes, representing 44.39%. However, Chavez said in his first appearance that he would get more than eight million votes. On the other hand, the turnout in the country’s election was a record: 80.94% of the 19 million eligible voters, a lot higher than the European average turnout: 55%.

International observers present in Venezuela noted that the day passed peacefully and agreed to recognize the reliability of the country’s electoral system. “I saw a very calm electoral process, much more than at other times, with full recognition by all of the transparency of the electoral mechanism,” a Spanish jurist and expert in international humanitarian law, Enrique Santiago, told EFE.

Shortly after the announcement of the results, Chavez thanked the Venezuelans for their support while addressing a large crowd gathered in front of the Miraflores presidential palace. He also called the election a “perfect democratic battle on all fronts.”

“I would like to thank…the revolution has triumphed…truthfully, this has been the perfect battle, a democratic battle,” Chavez said. “Today, we start a new cycle of government, in which we must respond with greater efficacy and efficiency to the needs of our people… I promise you I will be a better president,” he added.

It is noteworthy to point out that Chavez has not only defeated his opponent but also a huge disinformation campaign launched against him by media outlets controlled by the right-wing opposition and international corporations. Some TV channels as Univision and Globavision are notorious by their lies and manipulation against Chavez and its Bolivarian revolution. As Washington academic Mark Weisbrot explained: Venezuela’s media “routinely broadcasts reporting and commentary that would not be allowed under FCC rules in the US.”

However, in Venezuela most of private media are in the hands of the opposition and they do not have problems to spread lies or even openly call for a coup. In contrast, 54 journalists in Colombia, an ally of the US in the region, have been murdered for their work in the last decade, according to the International Federation of Journalists.

In Honduras, where military seized power in a US-supported coup, the peaceful protests have been violently repressed with killings and many wounded. The media has been censored and independent radio and TV stations have been shut down. Political leaders have been arrested and intimidated and fundamental civil liberties have been suspended. Western media ignores this reality and do not publish information about it.

In Europe, the anti-Chavez campaign has also been very active and not only among right-wing media but also among some “liberal” ones. For example, the Spanish newspaper El Pais has been fiercely belligerent against Chavez. The newspaper published an editorial on the same day of the election claiming that the latter was “a referendum on the figure of the president and the continuity of his autocratic regime.” It described the governance model as a “perversion of democracy.” The newspaper went on claiming that Capriles was “a centrist leader,” who had “been gathering momentum in recent days” and added that “the large percentage of undecided voters, around 12%, can be decisive in the final outcome.”

Another columnist of the newspaper, Ibsen Martinez, described Venezuela as “an authoritarian petro-state without counterweights” and added that “most of Venezuelans now feel rejection for the vocation of continuity” of the president.

In another article, El Pais echoed US hopes for the defeat of Chavez. “The White House has been watching with close interest the elections that will take place” in Venezuela, it wrote. “In the last days, media experts speculated with the idea of a Venezuela without Chavez.” It added that the US hoped that if Chaves was defeated, “it could led to the restructuration of the Bolivarian Republic’s strategic alliances with other Latin American countries and with Iran.”

Due to its political and economic dominant role and wealth, Venezuela has become a target for Washington, which fears the dangerous example of a Latin American country rejecting to submit to US diktats and preventing US big corporations from taking over its natural resources, and especially the oil.

When the US and the local oligarchy understood that they could not stop Chavez, they tried to overthrow him through a coup in April 2002, but the immediate reaction of Venezuelan people and military frustrated the attempt. A posterior nationwide strike of right-wing businessmen, which sought to strangle the country’s economy, also became a failure.

The goal of this media offensive against Chavez is not only to overthrow him but also to hide Venezuela’s achievements in the post-neoliberal revolutionary period, which started with his election of as President in 1998. From any perspective, these achievements are impressive. Poverty has been cut a half and extreme poverty by 70%. Millions of Venezuelans have had access to health care for the first time, and college enrollment has doubled, with free tuition for many students. Inequality has also been considerably reduced. By contrast, the two decades that preceded Chavez, Venezuela was one of the worst economic failures in Latin America, with real income per person actually falling by 14% from 1980-1998.

The media campaign is just another aspect of a wider battle in Latin America and the world between imperialist domination and national liberation. Latin America has elected in recent years a group of leaders -Hugo Chavez in Venezuela, Evo Morales in Bolivia, Rafael Correa in Ecuador and Daniel Ortega in Nicaragua- who are deeply involved in the fight for social justice in their societies and political independence for their countries and the continent on the whole. Other leaders who followed that trend -Manuel Zelaya in Honduras and Fernando de Lugo in Paraguay- have been illegally toppled by US-supported right-wing coups.

British journalist Mark Weisbrot has written in The Guardian that “Chavez’s victory is a part of the “Latin American Spring” that “has produced the most democratic, progressive, and independent group of governments that the region has ever had. They work together, and, as the Latin American reactions to Chavez’s victory have showed, Venezuela has solid support among its neighbors. This is why Brazil’s former president Lula da Silva said, “A victory for Chavez is not just a victory for the people of Venezuela but also a victory for all the people of Latin America . . .”  Link: http://presstv.com/detail/2012/10/09/265770/hugo-chavezs-perfect-victory/