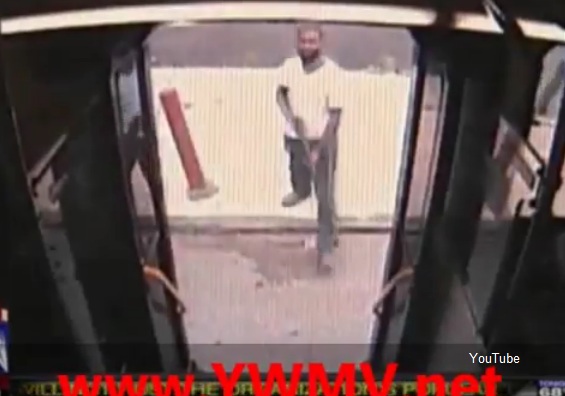 Tommy Sotomayor Says:  No matter what you say about me, you cant say I make these news stories and videos up! This woman was so mad that a black man said something about her beating her child in public that she called some thugs and said come and shoot this fool and the black men did it!  This goes to show how weak minded black men are and how violent and manipulative black women are!

As you see in this case, the black men got 20 plus years yet the black woman only gets 5 even though if it were not for her, none of this would have happened.  So where does her son go?  What mother would do this?

Penny Chapman, the young mother at the center of a shocking SEPTA bus shooting last June, dabbed her eyes in court Tuesday morning, apologized and pleaded guilty to attempted murder and related counts.

Chapman’s decision to sidestep a trial — during which video would have been shown of her friends shooting up the bus on June 18 — was likely a wise decision.

Had she been convicted of all the charges against her, Berry said, he could have sentenced her to 304 years in prison and fined her $625,000.

On Wednesday, two of Chapman’s six co-defendants, Lawrence Rahyle, 19, and Keith Mup Bellamy, 23, are scheduled to go on trial for their parts in the brazen, daylight shooting of the Route 47 bus at 7th Street and Cecil B. Moore Avenue. Gunmen Karon Patterson, 20, and his cousin, Raheen Patterson, 22, pleaded guilty last month to attempted murder and related counts, and Berry sentenced each to 15 to 30 years in prison. Another cousin, Angel Lecourt, 19, also pleaded guilty and is awaiting sentencing, while a female cousin, Dimetrius Patterson, 23, has a preliminary hearing June 14.

Of Chapman, Assistant District Attorney Morgan Model Vedejs said: “She’s the one who made the phone call that started this melee.”

The trouble began when bus passenger Lafenus Pickett told Chapman that she was committing child abuse for the way she was spanking her young son. Chapman made a phone call to Dimetrius Patterson to walk her home, but Patterson alerted the others, who met the bus at 7th and Cecil B. Moore, according to Chapman’s attorney, Joseph Lento.

But Pickett testified during a preliminary hearing last August that Chapman ordered one of her co-defendants to shoot him after she got off the bus with her son.

Seven cameras, with views inside and outside the bus, captured the group of young thugs firing at it with an assault rifle and a pistol. Standing outside the bus’ back door, two gunmen fired into the vehicle, sending passengers diving for the floor and running to the front of the bus to crouch around the driver. Despite the bullets that left trails of gun smoke in the bus, no one was hurt.

“In light of what was at stake, it was Penny’s decision, entirely, to plead guilty,” Lento said.