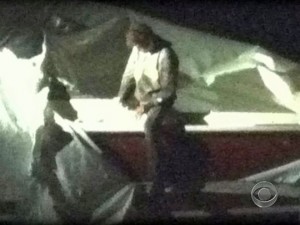 NewsRescue-More stories are emerging that the main stream media is not particularly interested in publishing. Here is the latest piece of the story.

Paul Joseph Watson- Video footage from the scene of the shootout with the alleged Boston bombers appears to contain audio of the suspects screaming out, “We didn’t do it!” as police fire on the two brothers.

Although by no means clear, the words below appear to be shouted by the suspects as they come under police gunfire.

Despite being described as a “shootout,” the audio suggests that shots are only being fired in one direction by police and that the brothers are not returning fire at this point in the exchange.

The tape offers little proof as to the Tasrnaev brother’s guilt, but it follows a number of other intriguing caveats which some have offered as evidence that the suspects were framed and had no actual involvement in the bombings.

– A Facebook post attributed to Dzhokhar Tsarnaev although not authenticated reads, “This will be the last message before the police get me. I never done it. They set me up. Father please forgive me. I am sorry it has come to this.”

– The suspects’ mother Zubeidat Tsarnaeva continues to insist that her sons are innocent, telling the Associated Press, “It’s all lies and hypocrisy.”

– Tsarnaeva also claims that the FBI “were controlling his every step,” referring to Tamerlan Tasrnaev, and that both the FBI and the CIA were following the brothers since 2011.

– The aunt of Tamerlan Tsarnaev, claims that the footage which emerged of police arresting a naked uninjured man was her nephew, contradicting the official narrative that Tsarnaev was critically injured in a shootout and suggesting he may have been killed while in custody.

– Eyewitnesses to the shootout contradict claims by authorities that Dzhokhar Tsarnaev ran over his own brother in a car, stating instead that he was run over by police.

– Despite numerous images of other suspects with large black backpacks at the scene of the bombings, the FBI insisted that these photos not be deemed credible and that the Tasrnaev brothers were the only possible culprits.

NewsRescue- Currently CNN has a headline about Dzhokhar arriving in the hospital “covered in blood.” This is surprising considering that he hid himself in such “state,” in the boat for several hours and yet climbed out of the boat -as can be seen in the headline image – without assistance and not apparently drenched in blood. Latest official reports also determined that there was no gun at the boat.