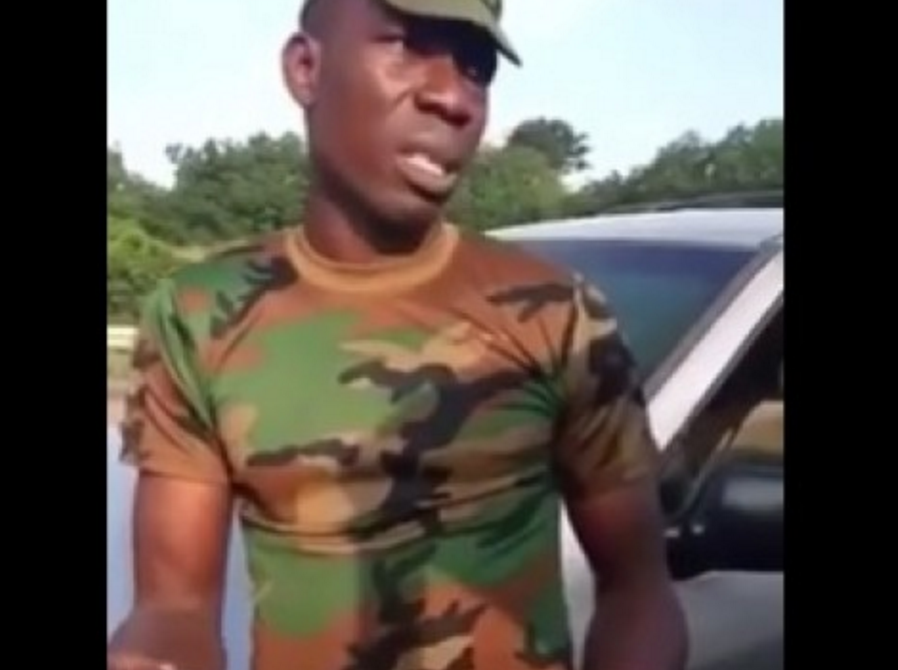 A Nigerian civilian wearing a camouflage found himself in the soup at a location suspected to be along the Lagos-Ibadan expressway when he was apprehended by soldiers.

Although the date of the incident is unknown, a video of the earlier parts of what transpired was posted on Facebook on Sunday, and it had generated well over half a million views as of Monday afternoon.

Asked where he bought the camouflage, the civilian said: “I bought it from the road. From Ibadan. Around toll gate. I just saw them displaying it.”

However, one of the soldiers brought out a handkerchief, insisting that the civilian could never have seen its camouflage on the road.

“You can never see this one for road,” the soldier said.

But after receiving a slap for his explanation, and after another soldier said “oga bring that rifle make you fire hin leg first“, the civilian confessed to have bought it at Kontagora.

Told that he would be shot in the leg nevertheless, he went into fits of “oga please, oga please; save my life, oga please.”

When it appeared the soldiers, numbering at least five, were bent on shooting him in the leg as one of the them had corked a rifle, he grabbed the nearest soldier and used him as a human shield, begging profusely.

“Oga please, oga please; I’m not leaving,” he said when asked to leave the human shield he was clinging to.

Eventually, the soldiers, with one of them still holding a rifle, told him he was free to go. But he refused, fearing he could still be shot.

When the soldier being used as shield succeeded in freeing himself, the civilian grabbed another.

He hadn’t been shot when the two-minute-forty-six-minutes video ended, but it is unlikely that he was shot, as the soldiers laughed hysterically while he pleaded not to be shot, giving the impression that they were just catching their fun.

But with the army’s history of brutalising civilians, there is also the possibility of keeping the worst action from the camera; perhaps the threat was indeed carried out after the video recording.

The Nigerian army frowns at indiscriminate wearing of of camouflage — an offence, which under Section 109 of the Criminal Code, is punishable by one-month imprisonment or a fine of, wait for it, N10.

In 2014, part of a letter to celebrities, purported to have emanated from the army, read: “This is to inform the general public and most especially Nigerian celebrities to abstain from the use and abuse of the Nigerian Military camouflage. Several investigations were carried out and we noticed the camouflage is mostly being used by Nigerian celebrities in music videos, photo-shoots and concerts.

“In this [sic] same videos and photo sessions, Nigerian celebrities like ‘Jesse Jags’ smokes [sic] marijuana while putting on the Nigerian Military camouflage. Henceforth, any civilian found GUILTY of putting on the camouflage irrespective of their social status will be dealt with severely.”

Although the army denied writing the letter, Olajide Laleye, its spokesman at the time and brigadier-general, said it was indeed a crime for civilians to wear the camouflage or any other uniform of the army.

“…there is a law which prohibits all civilians from wearing the Army camouflage and this law binds the celebrities too,” he said.