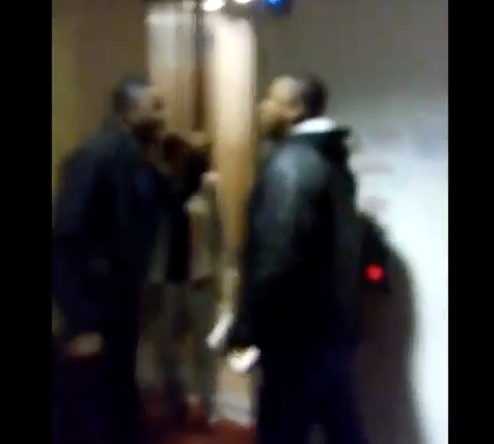 Officials of the Nigerian consulate in New York molested two women frustrated over the problems with the issuance of their passports and as Dr Perry Brimah, a Rights Advocate recorded the scene and intervened on behalf of the victims, three officials of the embassy pounced on him, beat him up and seized his two cell phones.

The afternoon of November 14th was perhaps just another day at the Nigerian embassy in New York, except that the people who came for their passports said this time they were not taking it any more. Weeks to months delays to receive passports are common place at the embassy.

One of the victims, name withheld, who complained that she had been on the passport issue since July, had said she was not leaving the embassy without her document. As another lady with similar issues complained and protested bitterly, a female embassy official walked out and told the frustrated citizens in the hall that “getting their passports was a privilege and not their right.” This was the turning point. As Dr Brimah recorded, he immediately retorted that she did not have a clue about her duties and that it was the right of citizens to get passports and not a privilege.

Ruckus ensued as the Nigerians present vented their displeasure at the embassy staff, calling her all sorts of names and telling her that she probably did unmentionable things to get her job.

As other more senior staff came out, they continued to disparage the frustrated clients, manhandling ladies and telling them that they could sleep there if they wished.

Dr Brimah intervened and rapped them for molesting the ladies and disrespecting them. The staff replied that Dr Brimah did not witness how the ladies vexed at them initially. To which Dr. Brimah responded that there was simply no justification for their unprofessional, chauvinistic and disrespectful behavior to the women. A man who appeared to be the Consular General who said he had just been posted to that embassy days earlier and was trying to straighten things out was directly involved in the manhandling and initial disrespect to the victims.

A female official again came out and told everyone that they should be quiet and respectful, to which Dr Brimah told her that she did not understand that she was a public servant, whose duties were to serve the Nigerian populace who paid her and all staff at the embassy their salaries. This got the lady to lose her mind, literally disclaiming that fact and saying that those present were her servants and not the other way around. Calling Dr. Brimah and his mother all sorts of names.

Later things calmed down as the “consular general” realized the happenings on tape were not a good look.  But then another official came out and again began disrespecting the ladies and telling them that they had no rights and could be chased away. This happened shortly after a foreigner had gotten so mad and an embassy official got into physical confrontation with him. The foreigner complained that he was disappointed witnessing how Nigerians were treated in the embassy.

As the latest official continued to ridicule and insult the ladies, Dr Brimah again began recording. This provoked the wrath of the government officials present who said he must not record in spite of no warning against recordings on the walls of the waiting room. As Dr Brimah objected, begging the officials to call the police, three hefty embassy staff pounced on him and gave him a thorough beating, ripping his clothes to seize his two cell phones.

His cell phones were never returned to him as the Nigerian embassy officials kept them in their possession till the close of day, despite Dr Brimah asking the “consular” if he had to beg to get his phone and getting on his two knees in a dramatic show of frustration while telling the “consular general” that “I realize you are god, can I get my property?”

New York police department could not get involved because the events at the embassy are on Nigerian soil.

Dr Brimah has promised to continue to fight injustice and the god-complex, beyond human feeling of Nigerian government officials. He calls on all Nigerians to never entertain disrespect from public officials paid by us the people no matter what they stand to lose. “Do not pay them bribe. Do not sway for them whatsoever. Even the Nigerian president is a public servant, paid by you to serve you. Unlike many of us who earn our living from decent jobs, they live off of us from our tax money and our resources. If we do not fight them today, we leave them to cheat us and others including our parents and children tomorrow,” he said.

Dr. Perry Brimah is convener of the @CabalMustGo movement against oligarchical corporate, government institutionalized greed, and has announced that he is contesting for President of Nigeria in 2019.