ATTENTION!!! Every Nigerian residing in Ghana Must watch.

Now!!!
Fellow Nigerians kindly stay indoors as you have been advised to, police are currently been attacked by angry youths in the crime scene because they tend to make peace in the neighborhood consigning the killing of A Ghanaian and 5other Nigerians.
#SaveANigerianBySharingThisPost
#NoBeJokeStayInsideYourHouse
#Peace

Day 2
ATTENTION ATTENTION ATTENTION
According to the news update of yesterday incident 4-5 Nigerians have been confirmed dead along Santa-Maria few kilometre away from Sowutom.
please and please every Nigerian are advised to stay indoors till things cool off.
#SaveANigerianBySharingThisPost
#NoBeJokeStayInsideYourHouse
#Peace

Day1
Kindly tell any Nigerian friend u know not to drive or come out around Sowutom road, a
Ghanaian boy was killed by a Nigerian today and they have been looking for scape goat ever since… so Nigerians are advised to stay clear because the street is quiet Tensed.
#RiotStayIndoors
#ShareThisPostWithAFriend 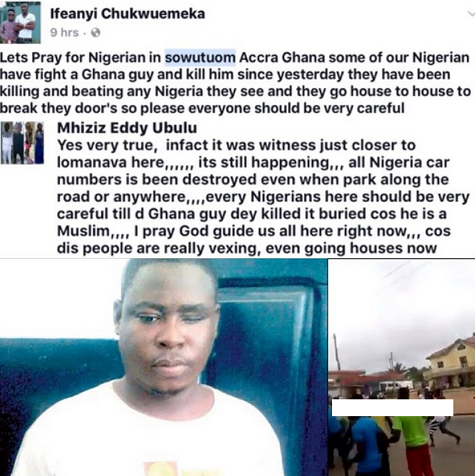 According to Ghana Web Full story….

The Police at Sowutoum in the Ga Central Municipality of the Greater Accra Region have arrested a 48-year-old Nigerian for allegedly stabbing a man he claims to be a thief.

Thompson Peter allegedly stabbed Misbau Amadu, 27, in the head with a knife after a confrontation at his residence at about 10:00 pm last Thursday.

The victim was rushed to the Mary Lucy Hospital but was pronounced dead on arrival by the doctors.

Narrating the incident to DAILY GUIDE, Inspector Danso, said a week ago, Thompson Peter lodged a complaint at the Sowutoum Police Station that Misbau Amadu had broken into his apartment and stolen some items.

After taking the statement of Thompson, the PRO said the police proceeded to the residence of Misbau Amadu with the intent of inviting him to the station to help investigate the claim but he was not available.

On Thursday morning, Thomson reported that he had spotted the supposed thief in the area and so a detective was dispatched to the place but he was not seen.

Thompson said at about 9:00 pm last Thursday, Misbau came to his (Thomson’s) house, armed with a knife to attack him for reporting the case to the police.

In the course of the fight, Thompson said he overpowered Misbau and stabbed him in self-defence.

“The matter is still under investigations,” Inspector Kwabena Danso posted.