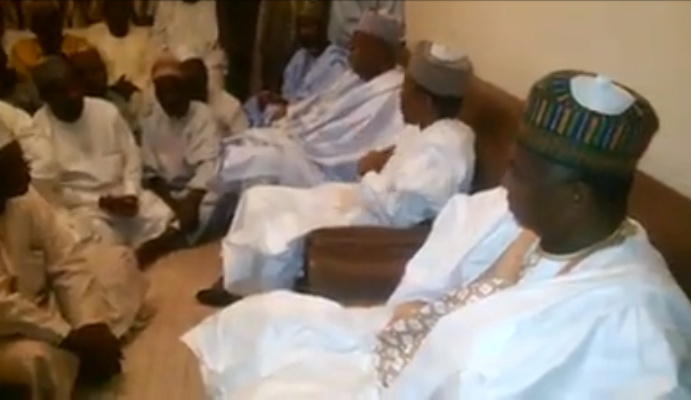 We have obtained footage of a recently held secret PDP party meeting with the nation’s security adviser in attendance.

Scroll to bottom for video

The meeting was that of the deputy governor of Sokoto state, Mukhtari Shagari’s group convened by him to discuss how to work with other groups within the Sokoto State PDP, particularly the former governor Attahiru Bafarawa’s group to strengthen support for the governorship candidate of the party.

Mukhtari Shagari (Deputy Governor, Sokoto State) spoke all through to set the stage for the discussion. It appeared the National Security adviser, Sambo Dasuki inspired the meeting as part of his contribution to fence mending among the fractured groups, namely: Muhtari Shagari and Yusuf Suleiman, a former Minister who contested for the PDP governorship candidacy, and Bafarawa, the former Governor whose candidate, Alhaji Wali (a former Minister) is the PDP’s governorship candidate. NAS Samo Dasuki as we revealed has been promised by Nigeria’s president, Goodluck Jonathan, to be made Nigeria’s highest northern and Muslim leader, Sultan of Sokoto for his moves to deliver a victory to president Jonathan in the March presidential elections. He has been working aggressively including openly subverting the democratic process, from his office to this effect.

Mukhtari Shagari- “You will that when we met the last time I gave three people to be part of the committees that will work to bring normalcy. If we had all kept to our commitments we will not be having the problems we are having now.

“But they all went about thinking that with or without us they will make it. But how can any one think like that? That is why every one you see leaving PDP to APC today, in truth, will tell you that it is because of Bafarawa and his antics (clapping of hands from the audience).

“Now you all know we do not just talk. All we want is success. Now you all know that I have been pleading with them that let us sit down and resolve our issues. I am very much aware that Milgoma (Sokoto State PDP Chairman) is stark illiterate but because I have already committed my self to Bafarawa that I will support his candidate for Chairmanship of the party, we all consented.

“I was the one that took him to the delegates and pleaded and ensured that we all supported him. Yusuf Suleiman and his group refused to support that arrangement. I however, said that they should leave everything to me since President Jonathan instructed that we should all work with Bafarawa. Refusing to obey the instruction would mean not showing respect and loyalty to the office of the President. Because of that, even though I knew very well that he (Milgoma) has not primary school certificate and that Bafarawa was himself not even around, still, we all worked to get him elected as Chairman of the party. No sooner than he became victorious he took deliberate steps to sideline and abandon us. The Chairmen are here to testify, we said that whether any one likes it or not, we are for Wali (the PDP candidate), because he was endorsed from Abuja.

“Now if you brought any one from Abuja, we know very well that his ward chairman, as perhaps the only person he knew must still bring him to us, Muhtari Shagari or Yusuf Suleiman. This is because even Abuja knows that whether we win or loose, we are the ones that must bear the responsibility. Because of this we would not like a situation to arise where we will be asked questions regarding our performance in Sokoto.

“If we did not cooperate with the candidate we are not only bringing him down but we are also bringing down ourselves. What brought us here, therefore, is to see how will bring every body together and resolve the contentious issues. We pray to Almighty God to help us in this endeavor.”

Then he called for a prayer which was rendered in both Arabic and Hausa, asking God to help and protect the NSA, Muhtari Shagari, and President Jonathan, as well as for peace and amity in the land and the end to insecurity in the North and Nigeria as a whole.