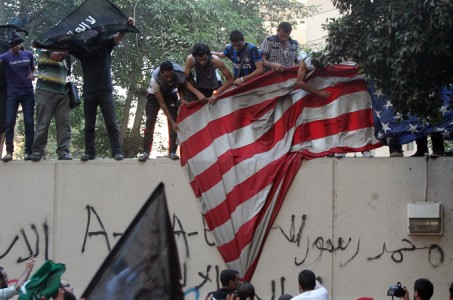 The statement appears to signal a rapidly waning tolerance of Morsy’s Muslim Brotherhood by the military-backed government.

The comments by Minister Mohamed Ibrahim followed clashes overnight between Morsy’s supporters and those opposed to his rule that left dozens dead, an escalation of violence that has raised concerns among Western leaders about the stability of a key ally in the region.

Ibrahim did not outright disavow claims by Muslim Brotherhood protesters that police fired on them. But interim Vice President Mohamed ElBaradei condemned the “excessive use of force” that resulted in deaths, state-run EGYNews reported.

Tensions between the sides were likely to be further inflamed after Ibrahim told reporters in a televised news conference that Morsy would probably be moved to the same prison where ousted dictator Hosni Mubarak is being held.

The decision, according to Ibrahim, will be made by an investigative judge. Morsy has been ordered jailed by a judge for 15 days on allegations, predating his election, that he had collaborated with the Palestinian group Hamas, according to state media. Read more