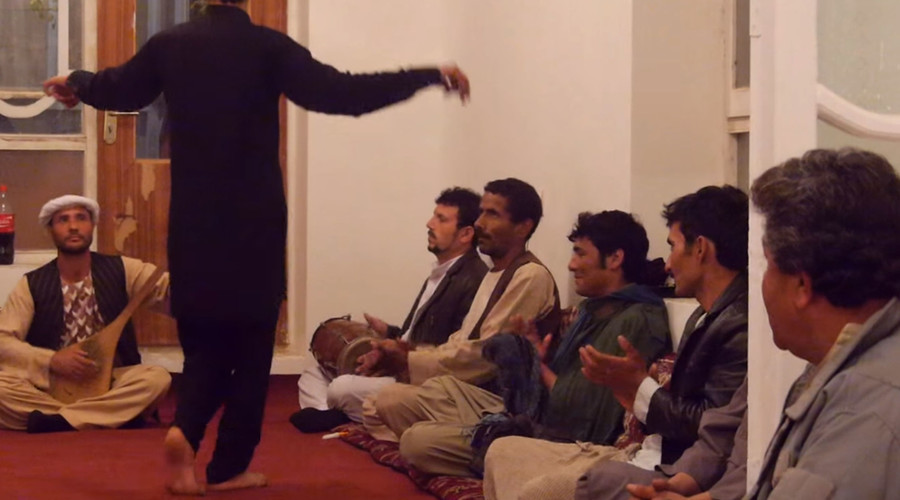 RT
In Afghanistan women are forbidden to dance in public. Local men suffer – they want entertainment and sex at any cost. RT talked to “bachas”, boys dressed as women who dance for older men at male-only parties, and “playboys”, the bosses who recruit them.

A private party usually ends up with guests bidding for a night with the ‘bacha’ (a ‘boy’ in Farsi).

“I was a field commander for 20 years,” Japar, a local “playboy”, told RT. “In the past, I worked for the government, but now, I’m retired. Everyone has their own interest, some people like boys more than girls. That’s their culture, from long ago in Afghanistan. They’re interested in boys.”

A bacha should be about 12, 13 or 15 years old to be recruited. “People like these ages,” Japar noted, adding that business owners “support” their boys until their “sell-by-date” expires, at about 25.

“When a boy is older, we make their life better. We buy the bacha clothes, pay for their wedding when they’re no longer wanted. We feed them well, we prepare all their food for them. We do everything!” he says in all honesty.

The offer to pay for a wedding can be the key factor for the boy’s parents. As a rule, a groom’s family will spend several thousands of dollars on the marriage ceremony.

Muhammad is 17, he’s been a bacha dancer for about five years. “I want to become self-reliant, to afford to pay my way, not have to look at someone else’s pockets, to earn money of my own, so no one can say, ‘he hasn’t got any money’. I went through so many hard days, in a really bad financial situation. After that I want a bright future, and I want to continue with my education, as well.”

Those involved in the business don’t try to hide their hypocrisy.

“I’m poor, I feel pity for other poor people, so I help them earn,” the man, who was introduced to the RT crew as the big boss, said.

He looks for new boys for his business in public places and often finds some at local playgrounds. The big boss is not interested in the most beautiful, but wants boys from the poorest families – “they’re easier to control,” he says.

“The Mullah sometimes asks me why I have bachas,” another business owner told RT. “He says it’s not Islamic, that money should be used in other ways, in good ways, not on boys. He’s the Mullah, he could destroy me.”

Even though the Afghan government has officially banned bacha parties, “some people, who are commanders, and high ranking people, are involved with the business,” according to Japar.

One of the boys was 12 when he was first offered to become a bacha. “At first, I didn’t know much about it, I thought it was just a game,” he told RT, adding that “sex can hurt badly too, but money is important.”

– And what if the Taliban catch you?

– They’d kill us by hanging us. Or kill us with a kebab skewer!