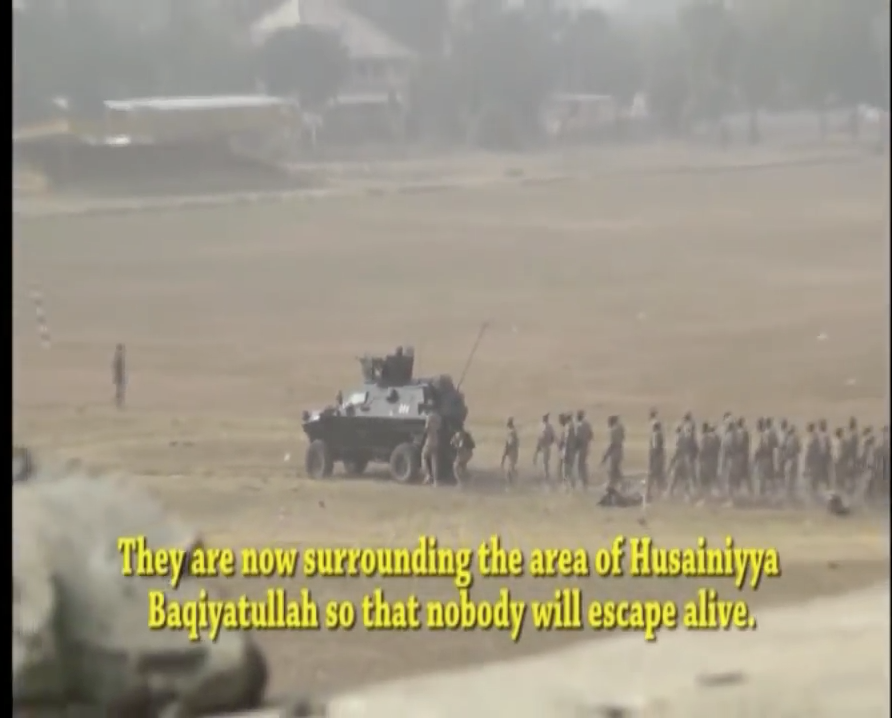 Gathering shuddersome evidence is increasingly painting a picture of a deliberate pogrom at involved centers in the December military massacre in Nigeria’s Zaria. The 1000+ massacre has been described as the worst single-event atrocious event in Nigeria and perhaps the world since 911, second only to the Baga 2500 Boko Haram genocide of January the same 2015.

A video released by the “academic unit” of the Islamic movement has hard-to-watch footage of the army patiently surrounding the Husainiyyah Baqiyatullah Islamic center’s entire perimeter.

In the 22 minute video, soldiers who are not taking fire are seen being carefully positioned in combat formation every 3 meters along the entire hundreds of meters perimetry. This arrangement is to ensure that “no one leaves alive.” The hundreds of deployed soldiers are all put to lie down and point their barrels at the Islamic center.

What could prompt such battle-mode arrangement ahead of the pogrom is left to be imagined. Even when Jesus’ armed disciple cut off an ear of Malchus sent by the high priest, a massacre of all disciples was not the decerebrate response.

Throughout the video there is no form of armed reaction from the Islamic center who are seen cowering in fear and praying to God.

According to a dead victim, Muhammadu Bukhari who died in the early hours of the 13th, the soldiers shot volleys into the center at every moving being all night and then bombed down the fence at about 3 am before coming on to finish off every man, woman and child within; and then they demolished. Late Muhammadu Bukhari’s last message was at 4.24am.

According to Human Rights Watch, over 300 bodies were buried by the army in mass graves to “cover-up” the pogrom. Hundreds of other bodies of these mostly students killed were deposited in the ABU hospital center.

Estimates put those killed at over 1000. Hundreds more were detained and several kept to die in detention, denied of medical attention.

There are accompanying allegations of rape and there is also video and picture evidence of wide spread demolitions by the army and Kaduna state government at over four centers unrelated to the initial incident continued over the next days. Allegations also include open execution and burning alive of several arrested victims including sons of leader Zakzaky.

The whereabouts of leader Sheikh Zakzaky are yet unknown as he and others have been denied visitation.