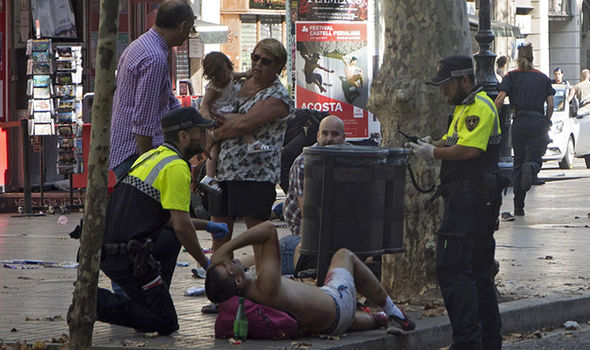 AT least 13 people have been killed and dozens injured after a van ploughed into pedestrians in Barcelona in an apparent terror attack, according to local media.

And reports say that a hostage situation involving two armed men is ongoing at a nearby restaurant.

In chilling echoes of the London Bridge attack, armed police have stormed La Boqueria open-air market amid claims that two terrorists are armed with rifles.

Cops clad in black and carrying machine guns were seen entering the market backed up by regular police armed with pistols.

Footage has emerged of captives being released and walking towards police lines.

And a third man, believed to be the van driver, is being hunted amid reports he too is holed up in the Turkish restaurant.

A huge emergency response rushed to the scene on the iconic Las Ramblas tourist hotspot at around 4pm today.

Metro lines have been shut and shoppers and pedestrians have been seen running into buildings as armed police flooded the area. Read more in the Sun