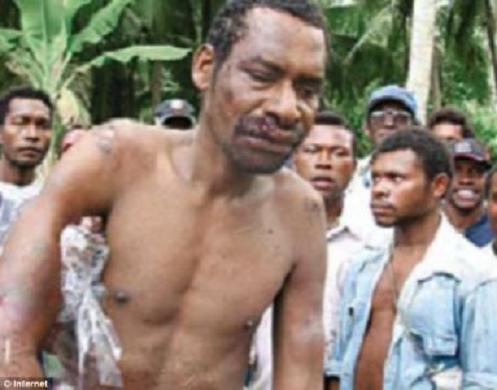 A notorious cult leader known as “Black Jesus” has been killed by villagers in Papua New Guinea, according to reports.

Steven Tari had been on the run since escaping from prison in the northern town of Madang last March. He was killed at a remote village outside the town on yesterday, a senior police official told local media.

Daily Mail described Tari as “a convicted rapist and cult leader . . . who was accused of murdering three girls and then eating their flesh and drinking their blood.”

It said that Tari, 40, a failed Bible class student, called himself Black Jesus as he travelled through the highland jungles in 2006, gathering thousands of disciples who moved with him, following his instructions to increase his ‘flock’. Villagers eventually captured him in March 2007, beat him into unconsciousness, tied him up and handed him over to police.

Reporting on his killing, BBC News said this afternoon:

“Tari had been serving a lengthy prison term after being convicted in 2010 of raping girls and young women who belonged to his Christian-based sect.

“A former Bible student, he was also accused of cannibalism although he was only tried for rape, AFP news agency reports.

“Provincial police chief Sylvester Kalaut said Tari and one of his followers were attacking a woman, tricked into joining the cult, when villagers from Gal surrounded and killed them.

“The National newspaper says he was ‘chopped to death’.

“The cult leader is also suspected of killing a schoolgirl earlier this month.

“Initial reports showed that Tari ‘was attacked and killed by locals’ after he killed one woman and tried to kill another, the Post-Courier newspaper reports.

“Tari was one of 48 people who managed to break out of Madang jail in March.

“He had studied to become a Lutheran pastor but disappeared from his theological college after disputing the Bible’s teachings.

“He previously said he was the ‘true Christ’ and promised his followers great wealth and redemption. Among his disciples were allegedly dozens of sex slaves he called his ‘flower girls’. Before his arrest his sect had thousands of followers in the villages.”

•Photo shows the so-called Black Jesus after his capture by villagers.