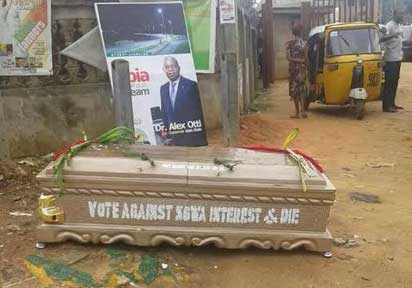 UMUAHIA—ABA residents woke up yesterday to meet caskets on some major streets in the commercial city, with warnings inscribed on them that if the people failed to  vote for an Ngwa governor they would be killed.

This is coming 48 hours to the supplementary elections scheduled by INEC to decide the inconclusive governorship elections in the state.

The two councils of Aba North and Aba South are part of the areas where the election will hold tomorrow.

The sight of the coffins and the warning sent fears into the people, prompting some voters to vow not to come out tomorrow to vote in the re-run election for fear of their lives.

However, the two major political parties involved in tomorrow’s election, the ruling PDP and APGA, have condemned the act and accused each other of being behind the evil act.

While PDP candidate in the election, Dr. Okezie Ikpeazu, dissociated himself from the dastardly act, his APGA counterpart, Dr. Alex Otti, described it as “despicable, shameful and barbaric act by desperate and frustrated politicians.”

APGA also blamed it on the PDP which it accused of using the coffins to discourage its supporters in Aba from coming out to vote in tomorrow’s election.

“The attention of Dr Okezie Ikpeazu, the Peoples Democratic Party, PDP, governorship candidate for Abia State has been drawn to the ugly incident witnessed in Aba this morning, where caskets are being dropped at various places in Aba, with a threat that those who will not vote for Dr.. Ikpeazu and the PDP in the Saturday’s supplementary election will die.

“Dr. Okezie is by this means dissociating himself from such dastardly act, and also inform Abians and the general public that such is the handiwork of the opposition who have shown their desperations in various ways since the beginning of the governorship contest.