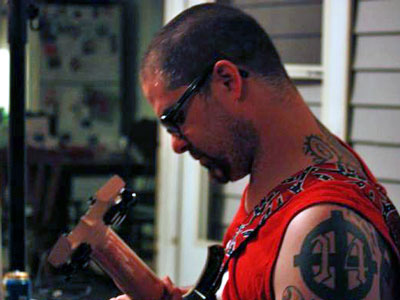 Wade Michael Page, a former member of the U.S. Military, has been identified as the gunman who killed six people and critically injured three others at a Sikh temple in Wisconsin on Sunday morning before police shot him dead.

Police are currently investigating what exactly prompted Page to open fire at the temple, which is located in Oak Creek, south of Milwaukeee, shortly before religious services begun. However new reports suggest that the deadly attack is being treated as act of domestic terrorism.

Page, who has been described as being a tall, bald, Caucasian male in his 40s, reportedly had a 9/11 tattoo. The bizarre tattoo is believed to be in honor of the September 11, 2001 terrorist attacks which occurred in New York City killing almost 3,000 people.

“He had tattoos, I don’t know what the exact markings were, or if they represented any of his beliefs or what they stood for,” Thomas Ahern, a spokesman for the U.S. Bureau of Alcohol, Tobacco, Firearms and Explosives, told Reuters.

Four people were shot dead inside the temple and three more, including the gunman himself, were killed outside in the parking lot.

The gunman allegedly ambushed one police officer, who was responding to a 911 call and helping a shooting victim, Oak Creek Police Chief John Edwards confirmed. A second police officer fatally shot the gunman.

Related: NewsRescue- Out of Wisconsin, A ‘KKK’, Supremacist plot to disintegrate Nigeria

Authorities allege that the gunman used a 9 mm semi-automatic handgun during the attack, which was later recovered at the scene.

Witnesses described the horrific scene where church goers were allegedly forced to hide inside closets and prayer rooms after Page began shooting.

“My brother in law was inside there … I heard he got shot from the back. This is a big tragedy for our church. Our church, we always felt this was a safe place,” one woman told the Milwaukee Journal Sentinel.

The shooter in the deadly attack Sunday at the Sikh Temple in Oak Creek was identified as Wade Michael Page, 40, sources familiar with the shooting investigation said Monday.

He served in the Army for several years and was assigned to psychological operations, or PsyOps, according to the sources.

He is no longer in the Army.

The Southern Poverty Law Center, a group that has studied hate crimes for decades, reported Monday that Page was a frustrated neo-Nazi who had been the leader of a racist white-power band known as End Apathy.

Heidi Beirich, director of the center’s intelligence project, said her group had been tracking Page since 2000, when he tried to purchase goods from the National Alliance, a well-known hate group.

The National Alliance was led by William Pierce, who was the author of “The Turner Diaries.” The book depicts a violent revolution in the United States leading to an overthrow of the federal government and, ultimately, a race war. Parts of the book were found in Timothy McVeigh’s getaway car after the bombing of the federal building Oklahoma City in 1995.

Beirich said there was “no question” Page was an ardent follower and believer in the white supremacist movement. She said her center had evidence that he attended “hate events” around the country.

“He was involved in the scene,” she said.

Pierce is dead, and Beirich said the National Alliance is no longer considered to be an influential group.

Page gunned down six worshippers at the temple and shot and injured an Oak Creek police officer who was helping a victim before a second Oak Creek officer shot and killed Page.

Three people, including the officer, were injured in the shooting.

The gun used in the temple shooting has been traced by the U.S. Bureau of Alcohol, Tobacco, Firearms and Explosives, said Tom Ahern, spokesman for the agency. Under an urgent trace request, the ATF has determined the original buyer of the weapon. Ahern said it is up to Oak Creek police to release information on the gun purchase.

Law enforcement officials have been investigating a duplex in the 3700 block of E. Holmes Ave. in Cudahy believed to have been the residence of the shooter. The block was cordoned off for a time Sunday night as officials investigated inside, and residents were evacuated from their homes.

The officers came out of the duplex around midnight, carrying large items.

Oak Creek Police Chief John Edwards said investigators carefully searched the house because they were concerned it might be booby-trapped.

Before moving to the Cudahy address, Page lived for a time earlier this year in a South Milwaukee.

David Brown, 62, a neighbor who lived the same South Milwaukee apartment building earlier this year, said Page was a recluse. He was “not a friendly guy,” he said. “You’d have more fun with a camel.”

“He was very quiet. You’d say hi and he’d kind of ‘uh.’ It was like he didn’t care if you were talking or not.”

Brown saw Page driving a plain white delivery truck several times. Page lived in apartment 5 with his girlfriend, Misty, who was going to UMM and who has an autistic son, and whose father helped out with child care and car maintenance.

Page liked to play music at odd hours of the night and work out in the basement with free weights.

Brown saw him there when he went to do laundry. “I never saw him carry a gun,” the former navy officer who is retired from working in aviation electronics said.

Page and his girlfriend moved out about 4 or 5 months ago.

“He didn’t seem mean. It was kind of like he was angry at the world. But I’m not a psychiatrist.”

The mass shooting occurred some time before 10:30 a.m. Sunday, as members of the temple prepared for weekly worship service that was to begin at 11:30 a.m.. The first 911 calls were recorded at 10:26 a.m.

Dozens of people were already at the temple when the gunman began his rampage, which some authorities are describing a domestic terrorist incident. But FBI representatives later backed away from that categorization, saying they were still investigating motive.

Police arrived at the temple, 7512 S. Howell Ave., within three minutes of the initial 911 call, with a dispatcher telling officers it was a report of an altercation. But a minute later the dispatcher added that there were reports of gunshots. Shortly after, she told them that “a bald male with glasses may have shot someone.”

The gunman acted alone, police said, but the reason for the attack remained unclear. Edwards said officers knocked on 200 doors Sunday in an effort to determine that there was not more than one shooter.

What is known about the attack is that it is believed to be the most deadly U.S. attack on Sikhs, who often have been mistaken for Muslims and targeted in hate crimes, in recent memory.

One firearm was recovered at the temple as well as multiple magazines.

According to a witness, the gunman first walked up to a priest who was standing outside, shot him, then entered the temple and began firing.

As the shooting erupted, women, children and men hid in the temple for more than an hour. They took refuge in restrooms and a pantry among other places.

Page had lived in North Carolina and Colorado before moving to Cudahy.

Survivors inside the temple were taken from the building about noon on Sunday.

The officer who was shot multiple times by Page underwent two surgeries at Froedtert Hospital in Wauwatosa on Sunday, Edwards said, one of them lasting for five hours. Edwards on Monday said the officer was resting comfortably at the hospital with family by his side.

Two other men were taken to Froedtert Hospital with gunshot wounds. All were in critical condition.

“We will be gathering with our friends and family there,” said Balbir Singh.

“There will be a household full of people,”said Surinderpal Singh.