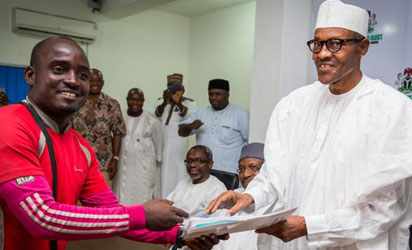 ABUJA – More excitement filled the air around the presidential campaign headquarters of the All Progressives Congress, APC in Abuja late Friday evening as Mr. Suleiman Hashimu, the Lagos to Abuja trekker finally met with the president-elect, General Mohammadu Buhari.

Hashimu had made a personal promise in 2013 that should Buhari contest and win the 2015 presidential elections, he would trek from Lagos to Abuja.

Having won the March 28 elections, Hashimu was forced to fulfill his promise and on Monday, April 20, 2015, he arrived Abuja from Lagos amid a cacophony of excitements and surprises.

Giving details of his journey to the President- Elect, the trekker said he passed through Kwara to Niger and then to Abuja.

Though his story may sound incredible, Hashimu said he didn’t care about what people would say of him, stressing that what mattered to him was the fulfillment of his promise to God and himself.

He said: “I made a promise because of the love I have for Mr. President that if Buhari should win the 2015 elections, I will trek from Lagos to Abuja which I have done. I thank God that I made a promise and I fulfilled the promise.

“I passed through Kwara and Niger states to Abuja. I was trekking from 6.00am to 6.00pm and anywhere I find myself when it is 6.00pm, I pass the night there.I spent 18 days from Lagos to Abuja.

“Once I found myself inside the bush by 6.00pm and I managed to continue the trek till 9.00pm to a nearby village.

“I made this promise two years ago. I am based in Ibadan and I started my journey from Lagos because Lagos is the most popular city in Nigeria and I started from Berger junction in Lagos.

“I am not bothered about what people think. It is a promise between me and my God. I don’t want anybody to believe me. I left Lagos because I made a promise. Right from Kwara state, I never walked alone for five kilometres. People always walk with me to the next village. I work with a construction company based in Ibadan.”

Speaking at the event, Buhari congratulated Hashimu and thanked God that his health did not fail him.

“I want to congratulate you for making it. He is a young man and he was lucky that his health did not fail him. I also heard so many stories that you wore almost half a dozen pair of shoes. I also understand that there are people who have been quite generous to help you to pay for pair of shoes”, Buhari said.